Written by Night For Vets on June 12, 2020. Posted in Gone But Not Forgotten 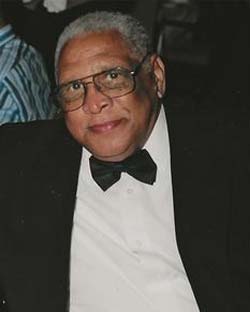 Mr. Murral (Mel) Brooks, 87, of Moreno Valley, California, departed this life on Friday, June 5, 2020. He was born on September 15, 1932 to the union of Gilbert and Alma (Esters) Brooks. Mel was born and raised in South Bend, Indiana, graduating from Central High School in 1951. He enlisted in the United States Navy and served as a Corpsman during the Korean War. He married his high school sweetheart Barbara Ann Barton in 1954 and their union lasted until her death in 1995. He then married Rosalyn Lebowitz in 1996 until her death in 2013. Mel was one of the first African American NAUI certified scuba instructors and worked several years as a sales manager at U.S. Divers before opening his own scuba dive shop at the Tyler Mall in the early 1970’s. After that venture, he held various sales management positions for local RV companies before settling into retirement as an insurance salesman. Mel was physically active since youth. He played high school and college sports, excelled at racquetball and was known as the man to beat at Riverside’s Tournament House. He was socially active in his community. He served as Master Mason and Secretary of his lodge. He loved the Lord and was one of the founding members of Santa Ana Shelton Street and Mt. Rubidoux Seventh Day Adventist churches. He was preceded in death by his parents, his brother Gilbert, his sisters Willa Hunt and Joanna Wheeler, daughter Jill Scott and step-son John Blanco. He is survived by his brother Robert Brooks of Ohio, Esther Stuckey of Indiana; children Barbara (Julie-Ev) Brooks, Murralyn (Richard) Mayo, Allison Brooks, Brian Brooks all from Moreno Valley, CA and Stephanie Higham of Claremont, CA; stepchildren Manuel (Ruth) Blanco of Moreno Valley, CA, Joseph (Angela) Blanco of Riverside, CA and his sister-in-law Yolanda Smith of Moreno Valley, CA. He leaves also behind 5 grandchildren, 3 great grandchildren and a host of close family and friends to cherish his memory.