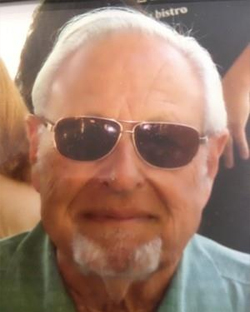 Nathan Shuman, age 92, passed peacefully on October 29, 2019 in Palm Springs, CA, his home for over 40 years. He was born on March 12, 1927 in the Bronx borough of New York City. His childhood was not an easy one. He was raised by his mother and sister, and at times, his grandmother and grandfather with whom he lived from time to time. His father was absent, but the one stable male figure in Nathan’s life was his Uncle Irving, a man he adored and hoped to see again upon his death.

Like millions of others in the 1940s, Nathan was called to the war effort. Nathan enlisted in the U.S. Army and trained at Fort Dix. He was assigned to the USS Bridgeport and travelled to ports in England and Germany to pick up U.S. soldiers and their war brides to assist in their return home. Nathan looked back fondly on his time in the service as it opened the world to him. He was proud to serve.

Despite the many challenges faced in his early years, Nathan embarked upon the one road available to him – public education. Nathan was a product of the fine public school system in New York in the 1930s and 1940s and enrolled at City College of New York, then known as the "Poor Man’s Harvard". He was an exemplary student. Working nights and weekends, Nathan earned a Bachelor’s degree in Accounting. While finishing up at City College, Nathan was invited on a blind date and was introduced to Lilliane Dzierlakta, the woman who became the love of his life and best friend. They were married June 4, 1950. Nathan and Lilliane were married for 68 years, until her passing on March 30, 2019.

Nathan and Lilliane welcomed their first child (Karen) in 1952 and then their first son (Kin) in 1954. In 1956, the family moved west, eventually settling in Orange County, CA. Their second son (Kip) was born in 1960. Although Nathan left NYC, he always stayed, at heart, a city kid. He loved cities; he loved walking and exploring cities; he loved sampling food of cities throughout the world. So as not to wander too far from his NYC roots, Nathan kept his Bronx accent to the end, proof that you can take the kid out of the Bronx, but not the Bronx out of the kid.

Nathan and his family started visiting Palm Springs in the early 1960’s. In 1979, Nathan and Lilliane moved full-time to Palm Springs. They loved Palm Springs and their many friends there. Nathan set up shop and practiced tax accounting in Palm Springs until he retired at age 78. He enjoyed his profession and missed its challenges and engagement for the last 14 years.

Nathan was a kind and gentle man. His difficult and poor upbringing did not cause him to be resentful or angry; in fact, his early experiences caused him to possess an incredibly nice and warm demeanor. Nathan never raised his voice; he spoke eloquently and with warmth; he was the consummate supporter, encouraging those around him. People uniformly liked Nathan. He was interested in people’s lives and was a caring husband, father, and grandfather. He will be deeply missed, but that pain is softened given how lucky members of his extended family were in having "Nate" for so many years.

Nathan is survived by his daughter Karen, sons Kin (Emily) and Kip (Maria) along with five grandchildren (Nicole, Alyssa, Ryan, Alaina and Malia), his niece Fabrienne and her two children (Billy and Austin). Nathan was predeceased by his wife Lilliane, daughter- in-law Ann (Kin) and their son Alex. He is also survived by many friends in Palm Springs.