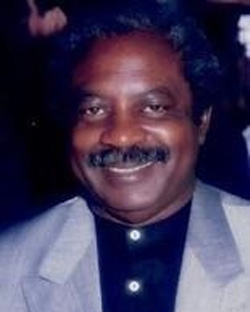 Nathaniel Johnson Jr. passed away peacefully on Saturday, April 3, 2021 at home surrounded by his loved ones, he was 85. He was preceded in death by his wife of 49 years, Hildegard Reiger Johnson.

Nat was born in 1936 in Uniontown, Alabama to Nathaniel and Mary Lee Johnson. He enlisted in the Army at age 18 and spent the next 27 years serving his country with two tours in Vietnam and one in Korea, receiving awards and commendations for his heroic service. He retired in Lake Geneva, WI in 1979 as an E-8 Master Sergeant and moved his family to Apple Valley, CA to be closer to his sisters who lived in Los Angeles at the time.

For the next few years Nat worked as a car salesman for Monty’s Chevrolet. He was a workaholic and when the opportunity presented itself to go to work for Allstate Insurance in 1983, he took it. Hard work soon paid off for Nat, as he soon qualified as an Allstate franchise owner becoming one of California’s top producing agents. Growing the largest agency in Southern California. He retired in 2000 and sold his book of business.

Germany was Hildegard’s native country and was their home away from home. They traveled there every other year to spend time with their German family for many years. In addition, they bought a motorhome and traveled with friends regularly, and thoroughly enjoyed retirement together.

Nat was a long time member of the Kiwanis Club in Apple Valley and served as the club President at one time.
Nat is also preceded in death by his parents, Nathaniel “Buster” Johnson, Sr. and Mary Lee Johnson; his sisters Lucinda “Cindy” Davis, Nellie Gray Gordon, Bertha Lee Jones; grandson, Jordan Gray.

He is survived by daughters, Faith Jordan and Janice Reed; sons, Eric Johnson and Reginald Jonson; a host of grandchildren, great grandchildren, nieces and nephews.