Written by Night For Vets on May 24, 2018. Posted in Gone But Not Forgotten 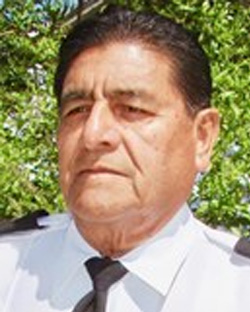 Natividad passed away at home in Riverside, CA on May 13, 2018. He is survived by his wife of 65 years, Yolanda Z. López, and daughters: Cynthia Dabé, Roberta Baltierra and Rosanne López; and son-in-law Jerry Baltierra. He has one surviving sister, Lydia Ortega and 2 grandchildren, David and Mia Baltierra, along with many nieces and nephews. He was born February 14, 1932. A native Californian, he attended Casa Blanca Elementary, Chemewa Middle School, and Poly High School before joining the Army in 1949. He played in the 49th Army Band while serving in Austria, and traveled in Europe during those 3 years.

He received his Bachelor’s degree in Engineering from Pacific States University in Los Angeles and went on to a successful career in the aerospace industry. He worked on NASA/military projects such as the Apollo missions, the Space Shuttle Program, and the Peacekeeper Missile Program among others. He earned his “wings” and obtained a Private Pilot’s License, was a certified scuba diver, studied astronomy, and was an avid photographer. He was a passionate genealogist and was a lifelong musician; he enjoyed playing the tenor, alto and baritone saxophones. He played for the Riverside Concert Band, San Bernardino Valley College Band, Moreno Valley Wind Symphony, Citrus Swing Orchestra, American Bavarian Brass Band, and the Filarmonica Chino D.E.S. among many, many others. He also played in the orchestra for Junior University Musical Theater and Riverside Children’s Theater for many years.

He was preceded in death by his parents Natividad and Selsa López, his sister Frances Rivera, and brothers Rito, Bronlio, Roy, and Tony, in addition to his sons Leonard in 1983, and Harold in 2017.