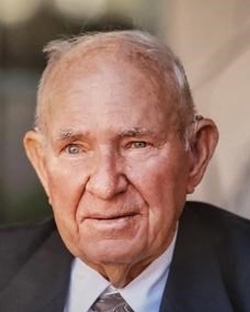 It is with great sadness that we share the news of the passing of Newell E. “Bud” Stone on September 15, 2020, in Riverside, CA. Bud was 91 years old and had been battling Parkinson’s Disease for several years. He was a very successful businessman and Rotarian who loved Riverside. Bud lived a full life and was passionate about his pursuits. He knew people everywhere and will be missed by many. Bud was born on a farm near Golden City, Missouri on February 16, 1929 and was one of five siblings. He was a farm boy who started working at a very early age. After graduating from Golden City HS in 1947, he and two buddies drove to Idaho in a 1931 Model A Ford to work on a ranch. As winter approached in 1948, Bud bought an Indian Chief motorcycle and headed south to California seeking warmer weather and opportunity, and he never left. Bud started working in the grocery business for Power’s Supermarket in Colton in 1949, eventually becoming Regional Manager. He met his future wife Helen Hilliard (who was shopping in the store one day) when she accidently knocked over a large display of jelly jars! They married in 1951. Shortly thereafter Bud was drafted into the US Army and was shipped out to fight in Korea with the 24th Infantry during 1951-52. After returning from the war, Bud and Helen started a family and raised three children, Nancie, Stacy and Bryan. Bud also owned and operated two neighborhood markets in Riverside named Waldo’s. He was a Groceryman and a Butcher for over 50 years. Never one to sit still, after Bud retired from the grocery business in the mid 1980s, he managed his real estate properties throughout the Inland empire. He was also a Riverside Airport Commissioner from 1982 to 1990 actively working on the Airport Master Plan, including lobbying efforts in Washington D.C. for funds to improve Riverside Municipal. He received the President’s Award from the Riverside Chamber of Commerce in 1983, and helped build several homes during the 1990s with Habitat for Humanity. Bud was also a private pilot and flew his Beech Bonanza out of Flabob Airport for over 40 years. He was an avid quad off-road rider and for many years enjoyed annual Thanksgiving trips to the desert with his brother Lloyd, and family riding trips to Baja between Christmas and New Years. Bud loved boating as well. He and his wife Helen had many wonderful memories with their Shipjack and the RV. Bud was a devoted Rotarian. He was a Charter Member of the Riverside East Rotary Club and served as the club’s second President in 1988-89. Bud was also a co-founder of the annual Riverside Show & Go Car Show in conjunction with the Old Farts Racing Team. This annual fundraiser has raised over a half million dollars that has been donated back to the community over the past 20 years. Bud was honored as Grand Marshall of the annual event in 2006. For Rotary District 5330, Bud was involved with Group Study Exchange and Youth Exchange and was an Assistant Governor, Conference Chair and District Treasurer. Bud also was the District 5330 Rose Parade Float representative for almost 20 years. Bud was preceded in death by his loving wife Helen, his daughter Nancie Blanton, his brother Lloyd Stone, and his two sisters Norma Geivett and Faye Horn. He is survived by his brother Carl Stone, daughter Stacy Howe, son Bryan Stone, 12 grandchildren and 11 great grandchildren.