Written by Night For Vets on July 11, 2018. Posted in Gone But Not Forgotten 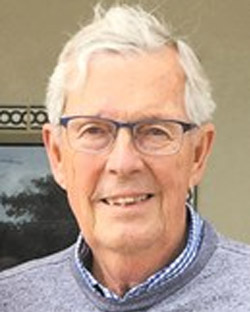 Noel passed away peacefully on July 4th, 2018, surrounded by his children and grandchildren. He was 82. Noel was born on November 12, 1935 in Walnut Grove, MN. He grew up on a farm with his parents, Louis and Lorraine Christensen, and two younger brothers, Derek and Colin. He met the love of his life, Rita Wilt, on a blind date and married her on May 4th, 1957. They were married for 61 years. Noel served in the U.S Army in the Korean Conflict for two years as a radio operator. Noel graduated from South Dakota State University with a degree in Civil Engineering in 1961. Upon graduation, Noel and his wife moved to Rialto, CA where he worked for CALTRANS. His career also included being the City Engineer for the City of Rialto, working for the City of Riverside, a Vice-President at Lampman and Associates, and the founder and President of CG Engineering for thirty years. Under his guidance and with the assistance of thirty-five employees, he was the contract City Engineer for Loma Linda, the City of Highland and other cities. After the sale of the engineering firm, he continued providing contract engineering services and expert legal opinions on various lawsuits. He was acknowledged by the State of California for providing fifty years of service as a licensed Civil Engineer in 2015.

Noel was the founding President of the Redlands Chapter of the Sons of the American Revolution and was a true patriot. He loved the flag and everything it stands for. He was a generous and supportive father, with a passion for cars, reading, college football games, and traveling, especially to our National Parks.

Noel worked tirelessly and selflessly so his family could enjoy a better life. He is survived by his wife, Rita; his four children: Scott, Steve, Lisa (Stephen Long), and Michelle; seven grandchildren: Lauren Christensen, Courtney Glancy, Caitlin, Christian, and Carson Eliason, James and Meghann Long; and one great-granddaughter, Brynn Glancy.