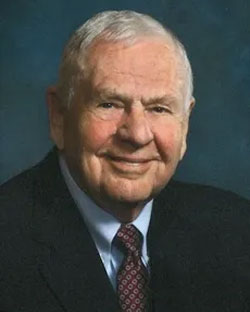 Norman Frederick Kaelber passed away peacefully, entering the eternal presence of our Lord Jesus Christ on November 5, 2022. Norm was a big man with a big voice and big heart. He was thoughtful, honest, and cared very deeply about his family and friends. Norman was preceded in death by Jan Kaelber, his loving wife of 59 years. Born in Newark, NJ, Norm was raised in Maplewood and graduated from Columbia High School. He received a degree in electrical engineering in 1955 from Lehigh University. While at Lehigh, Norm played lacrosse (Captain) and ice hockey, and during summers, was a beach patrol lifeguard in Stone Harbor, NJ. He was a member of Phi Delta Theta fraternity and Air Force ROTC. It was during college on a blind date that he met the love of his life Jan Neary (Kaelber), marrying in 1956. Upon graduation, Norm joined the US Air Force as a second lieutenant. He served his country becoming a pilot and Captain flying with the 407th Air Refueling Squadron at Malmstrom AFB, Great Fall, MT. After his service, Norm joined Shell Oil Company, working in the Gulf Coast of Texas and Louisiana. His position eventually took Norm and his family to Alaska in 1966 where Norm’s career continued in the oil and gas industries and later into construction. As a successful business leader, he and his partners formed SKW Constructors Inc., building notable projects at the Port of Anchorage, on the Kenai Peninsula, in Barrow, AK and other villages in the Arctic Slope region. Norm was also honored and proud to serve on the Board of Directors of National Bancorp of Alaska and Alaska National Insurance Company. He supported his community and charitable institutions, serving on the board of Providence Hospital (Anchorage) and a private foundation. He believed in strong education and was a proud alumni supporter of Lehigh University. Norm and Jan retired to Gig Harbor, WA in 1994. He was a winter resident in Palm Desert, CA enjoying the sunshine and community with friends. Throughout his life, Norm had many athletic, business, and other interests. He enjoyed spending time outdoors playing golf and tennis, road biking, hiking, skiing, and traveling. He was a voracious reader and puzzler. Norman Kaelber was one of the finest gentlemen ever, and we will miss him dearly. Norman is survived by his two sons and daughters-in-law, Kevin (Vicky) and Darrell (Judy), and four grandchildren, Stefen, Jason, Fritz (Emily), and Lara.