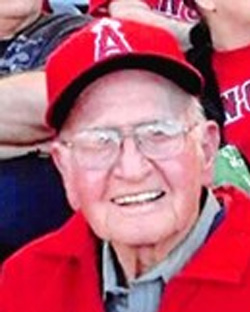 On July 12, 2018 O.D. passed away in his sleep. O.D. was born in Hot Springs, AK but lived most of his life in So. Cal. During World War II he enlisted in the Coast Guard and served 3 years as a Gunners Mate. After returning home, he worked various jobs until he found his love for carpentry. He worked 17 years at Leisure World and then obtaining his Contractors license he built the last set of apartments there. He then built many custom homes in Riverside, including those on Pounders Drive, where he lived with his wife, Mary Lou for 40 years. He met his wife, Mary Lou, at a Square Dance and were married Oct. 21, 1972 and danced together until he could no longer hear the caller. They traveled all over the U.S.A. in their motorhome with his brother J.E.,and wife Alice. Every night when they parked, they played his favorite game Pinochle. They always stopped on the way home to visit family and friends in Hot Springs, AK.

O.D. belonged to Silent Valley Club for 35 years where he and his wife enjoyed playing games. In the evening, friends always looked forward to coming over for O.D.s Happy Hour. O.D. also loved the Angels baseball team and watched them faithfully. He was a hard working man and could fix almost anything. He loved helping family and friends with building projects. O.D. mowed his own lawn and trimmed his bushes until the age of 92. He also drove his R.V. until the age of 90. He loved to feed the birds and sit on his patio swing and watch them.