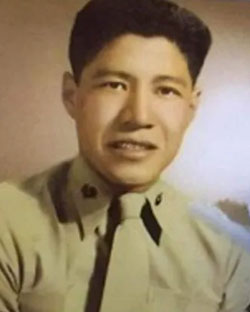 Oscar Flores Valenzuela of Barstow died Sunday, March 27, 2022 in Apple Valley. He was 91. Oscar was born July 26, 1930 in Corpus Christi, TX and lived in Barstow since 1949. He graduated from Barstow High School and received his Associates of Arts degree from Barstow Community College.

Oscar married his best friend and the love of his life Maria in 1950 at St. Joseph’s Catholic Church in Barstow. They later had one daughter Judi, son-in-law Jeff Poirier and one grandson Ethan Poirier.

Oscar Valenzuela was a member of Saint Joseph’s Catholic Church for 72 years. He was very active in his Church. Oscar was an Usher Coordinator for over 30 years and in addition, he was appointed as one of the first of three Sacristans when the program was organized in 1990’s. Furthermore, Oscar has served as Eucharistic Ministers, Altar Server which he visited the sick at Barstow Hospital, Rimrock Villa Convalescent Hospital and in their homes. He was a very active member with the local Knights of Columbus where he was appointed as 3rd Degree Knight. Oscar assisted in the construction of the 2nd story level of the Sister’s Convent in the 1970’s. He was a very active golf player and played at the many golf courses around Southern California. Oscar was also a golf instructor for the local high schools and area residents for many years.