Written by Night For Vets on November 19, 2018. Posted in Gone But Not Forgotten 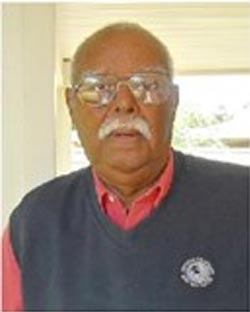 Otis MacFarlane, age 98, passed away peacefully on Wednesday, October 31, 2018 in Riverside. He was born August 17, 1920, in St. Thomas, Virgin Islands, to Frederick Charles MacFarlane and Cleomene (Clendenin) MacFarlane. Otis’ early life was shaped by being the oldest of three sons of West Indian parents who immigrated to New York when he was a child. His father was a well respected educator, and the family relocated when he was sent to new assignments. Dayton, Ohio became their home when his father was selected to be the first principal of Paul Laurence Dunbar High School.

Otis graduated from Dunbar High School in 1938. Following high school, Otis enrolled at Wilberforce University. His education was interrupted when he was called to active duty in the United States Army in 1942. At the end of World II, he earned his Bachelor of Science degree from the University of Dayton. In 1946 he married his beloved Modena Jane Terry and they had four children. They were married for 66 years.

Otis MacFarlane served 38 years as a civil service employee with the Department of the Air Force in the U.S. Department of Defense. He began his career in the field of national defense contracting procurement at Wright Patterson Air Force Base in Dayton, Ohio. He continued working in that field for most of his career, and the family moved as he was transferred to different Air Force bases and facilities. When he was assigned to Norton AFB in San Bernardino, the family settled in Riverside. In 1969, Otis was appointed Government Contracting Officer, one of only a few African Americans to hold that position. Otis retired in 1985, and he and Modena stayed in Riverside for the remainder of their years.

Otis is survived by his daughters, Denise Cleomene Flanagan, and Edythe MacFarlane (Gilbert lll) Brown; and sons, Otis Terry MacFarlane and Frederick Charles MacFarlane ll. He was a proud grandfather to his three grandchildren; Gilbert Brown IV, Patrick MacFarlane and Courtney Brown; and his four great grandchildren, Deshaun Brown, Jaylen Anderson, Julien Anderson, and Leah Marie MacFarlane. He was a beloved uncle to nephews Victor B. MacFarlane (Thaderine), Ramon MacFarlane, and Victor Hughes; and nieces Patricia Thomas, Susan Terry, and Karin Zimmerman. His memory will be cherished by his cousins; Bernice Jackson, Eleanor Roston, Pearl Marshall, Myron Jackson, Sharon MacDonald, and many others in his extended family, including his sister-in-law, Ellen MacFarlane, the widow of his youngest brother Ramon. Otis was preceded in death by his parents, his wife Modena, and his two brothers, Victor MacFarlane, Sr. and Ramon H. MacFarlane.

Otis MacFarlane was a devoted father, uncle, grandfather and great grandfather. He was an amateur and professional sports aficionado. In his younger years he was an avid recreational golfer. In his later years he became a Facebook social media maven, enabling him to stay connected to relatives near and far in the U.S. and the U.S. Virgin Islands. He will be greatly missed by his family and friends.