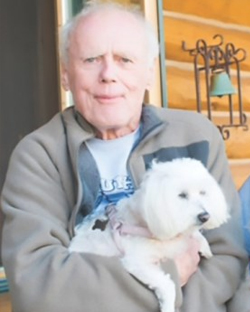 Glenn “Charlie” Owen Dunham Born on 6/7/1934 in Van Nuys, CA to Merton Lawrence Dunham and Mildred Catherine (Mercier) Dunham, passed away on 7/19/2022 peacefully in his sleep to fly in clear blue skies for eternity. Glenn’s love and pride for his entire family was absolutely palpable. Always encouraging of his kids’ and grandkids’ ambitions, he was their #1 biggest fan. His ability to communicate his love for his family, and have us truly feel it, was one of his best traits. There was nothing he wouldn’t do to for us. He also loved his siblings deeply. A true Renaissance man, Glenn could do anything he set his mind to do. Mechanically talented, he could fix anything. One of his favorite projects was rebuilding a 1940 Ford to its original beauty with his wife, Ginny. His carpentry skills and abilities led him to leave California for Montana to build a log home and live among nature and clean air. An occasional craftsman might come assist him but he did most everything himself – plumbing, electrical, carpentry, you name it. The home was on 20 acres where he grew alfalfa for horse feed. No hired hands helped, just his young teenage daughters, much to their dismay at the time! He was the epitome of a hard worker and perfectionist. His zest for life and adventurous spirit took him to the depths of the oceans and the heights of the skies and tops of many mountains. He learned to scuba dive in Hawaii where he lived while working there in the 1970’s. He then lived and worked in Truk, Micronesia and Guam and also loved diving there. He took up underwater photography while there so he could capture and share the ocean life’s beauty with his friends and family. He loved the friends he made in these foreign places, his lifelong friends. In addition to diving, he was fascinated and thrilled with flying. During his time in the Navy, he was the plane captain for Lt. Wally Schirra and fell in love with airplanes and anything military-related. He loved America and his time in the Navy. He later got his pilot’s license and flew small planes recreationally. One of his proudest accomplishments was buying a 1945 Stearman, in pieces and parts, and restoring it to its original glory with assistance from his loving wife, Virginia “Ginny” Dunham. They met many new and dear friends during this labor of love project while spending so many hours at the Redlands Airport. After selling their airplane, he and the new owner forged a deep friendship that lasted the rest of his life. Oh, and he also skydived; he was a fearless man. In addition, he and Ginny were avid gardeners. He planted beautiful rose bushes just for her to enjoy. They grew fruits and vegetables that they shared with friends and family. His attention to his yard and gardens was relentless. He loved many genres of music and he liked to sing. He taught himself to play harmonica. He loved books and reading, having worked for Prentice Hall Publishing for many of his young adult years. Never a shortage of books in the house! A very broad swath of subject matter was always around. He loved learning new things and was self-taught. He was fiercely independent and stood up for himself, his family and what he thought mattered in the world. He had a great sense of humor and was quick to laugh and smile with Ginny, his family and friends. We will forever miss his loving words and laughter. Glenn was preceded in death by both of his parents, his sisters Valerie J Sutherland Conter and Marlene L Sutherland Daroczi. He is survived by his wife, Virginia Dunham of Redlands, CA, his dog Waggles; his siblings Lenore “Lynsie” Deverich of Palm Desert, CA and brother Dennis Dunham of Grass Valley, CA; his children Scott (Katie) Dunham of Pittsboro, NC, Kevin (Lonette) Dunham of Grass Valley CA, Shellie (Keith Jarvis) Dunham of Denver CO, and Kimberlie (Gus) Dunham Bergsma; grandchildren Matt Dunham of Madison WI, Michael (Kelly) Dunham of Grass Valley, CA, Stephanie Dunham of Grass Valley, CA, Carlie Jarvis of Denver CO, Sandra, Sabrina, Bret and Josie Bergsma of Escondido, CA and his great-grandchildren Peter and Morgan Dunham of Grass Valley, CA.