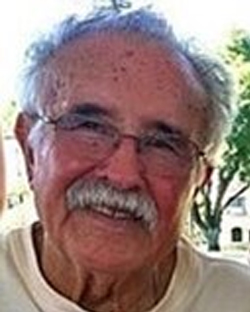 Paul (“Paul”) M. Flores was born on May 14, 1929 in Riverside, CA and died peacefully at home on February 29, 2020 surrounded by family and loved ones. From Eastside, Paul graduated from Riverside Poly High School (1947) and after high school served in the Air Force for three years. Paul was employed for forty-five years as an aircraft electrical mechanic for the Lockheed Aircraft Company. As one of only a handful of Mexican Americans at Lockheed, with quiet determination Paul defied expectations and stereotypes and became recognized as an extraordinarily skilled and valued worker. While at Lockheed, Paul also was self-employed as a gardener. He had many clients, but eventually one client convinced Paul to work only for him. A master gardener, Paul transformed an overgrown estate into one of the most beautiful gardens in Riverside. For Paul, gardening was freedom to be himself and have artistic expression in addition to providing more support for his family. Paul contributed his skilled labor for both Our Lady Guadalupe Shrine school and church, and his tireless work for its annual Fiesta Ranchera was awe-inspiring. Paul and his wife Maurilia were greatly admired within the Riverside Mexican American community as relatives, compadres, friends, and good neighbors.

Above all, Paul’s life was defined by his devotion, love, and care for Maurilia. Classmates at Poly High School, Paul (from Eastside) and Maurilia (from Casa Blanca) became high school sweethearts and were married in 1951, for 67 years until her passing in 2018. Paul’s dedication to Maurilia and his commitment to their raising a family together were unwavering. Also important to Paul was renewing and maintaining connections with other relatives, hence family drives to Merced, Fresno, Hemet, San Diego, and Camarillo.

For Paul, caring for his family included providing the shared experience of annual vacations. His children have fond memories of driving to Yosemite and to other places as far away as Canada as well as enjoying extended camping stints on California beaches. With the children grown, family travel took on a whole new meaning. Maurilia and Paul became accomplished world travelers with decades of journeys to dozens of countries. Climbing the Great Wall of China, traversing the canals of Venice, boating up the Amazonit gave Paul great satisfaction that he could provide such opportunities for Maurilia and great happiness that they could be together on these countless adventures well into their retirement years.

Paul was Father, Uncle, Cousin, Nino, and Papa. In each role, he provided encouragement in every aspect of life, emphasizing the importance of education, not for the degree, but for the opportunity it provided for accomplishment in life. The first in his family to graduate from high school, Paul himself, with his commitment to his family and his work ethic and remarkable repertoire of skills, truly lived an accomplished life. Being without Maurilia for the last two years of his life was extremely difficult, but Paul tried his best, knowing that is what Maurilia wanted him to do. In addition to Maurilia, Paul was predeceased by his parents Maura and Preciliano Flores, his sisters Antonia and Lucy, and his brother Andrew.