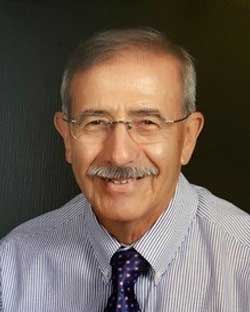 01-31-1937 – 09-01-2021 Pedro (Pete) Cano, Jr., of Upland, CA, peacefully passed away in the full embrace of his loving family. Pete attended Upland elementary schools, Chaffey High School and Chaffey College. He served his nation in the U.S. Army, including a year on the DMZ in Korea. After his honorable discharge in 1959, he married Rosie Garcia of Cucamonga in 1960, started his family and began working for General Dynamics. Pete retired in 1991 and began devoting many years to caring for his wife, Rosie, before she passed in 2009. In 2014, he married Ana Rencoret. Pete was an avid runner and jazz music lover. He enjoyed large family parties and reunions (especially when there was dancing) and cherished weekly family lunches and birthday parties where he could spend time with his daughters, sons-in-law and adored grandchildren. Pete will be rejoined in heaven with Rosie, his wife of 48 years, his mother, Juana, his father, Pedro Cano Sr., and his brother, Freddie. He is survived by his wife, Ana, his daughters Charlotte (Rich), Sadie (Gil), Suzan (Shannon) and Jennifer (Dan), his grandchildren Jacob, Stephen, Ethan, Hayden and Hannah, his brothers, Toribio and Johnny, his sisters Beatriz, Severa, and Valvina, and many cousins, nieces and nephews.