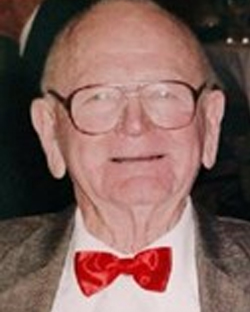 Phillip passed away in his sleep at home from complications of Parkinson’s. Phillip was born and raised in Corona, California. He graduated from Corona High School in 1940 and Chaffee College in 1942. Following college he enlisted in the U.S. Army Air Corps and became a pilot. While training in Bozeman, Montana he met his future wife, Irene Gillette on a blind date. As a First Lieutenant he was assigned to the 57th Bomb Wing stationed on the island of Corsica.

In December of 1944 on their way back from their last mission, his B-25 twin engine plane was shot down over Northern Italy. He bailed out and despite landing in enemy territory, with the help of allied partisans, he was not captured. He remained behind enemy lines fighting the Nazi’s until the end of the war, 5 and a half months later. He received The Purple Heart.

When the war was over he returned to Bozeman and married Irene in July of 1945. They returned to Corona and made their home there raising their family for nearly 60 years. Phillip worked for his father and uncle in their Newhouse and White citrus fumigation business in Corona for several years before going to work for 3M Company in El Cerrito, Ca. He retired from 3M in 1987 after 36 years. Phillip was a Master Mason member of the Temescal Palms Masonic Lodge in Corona for 62 years. He was a founding board member of Rainbow for Girls Assembly in Corona. He was also a volunteer at Corona Public Library Heritage Room for many years accruing over 2000 volunteer hours. Phil was an avid reader, especially of Southwest American history. His interest in family genealogy grew over the years to include volumes of handwritten family history and hundreds of photos on both sides of the family, some dating back to the 1600’s.

He and Irene were members of The First Congregational Church of Corona. They were involved in many social clubs and civic activities in Corona over the years including The Boat and Ski Club, 29ner’s, The 20-30 Club and several Bridge Clubs. They enjoyed camping, exploring ghost towns, rockhounding and metal detecting and spending time with friends and family. His keen memory, sense of humor and wit coupled with an unending knowledge of Riverside and Corona’s history, provided many entertaining hours of amusing and interesting story telling. His love and wealth of information about citrus, cactus, succulents, pecans, and apricots will be fondly remembered. Phillip was preceded in death by his wife of 54 years Irene (Gillette) Newhouse, his daughter Marilea Newhouse, his brother Billy Newhouse and his sister Mary Patricia (Newhouse) Wells.