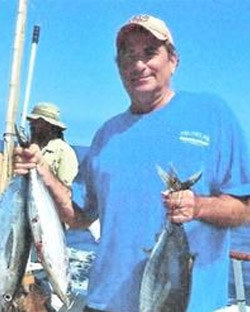 Ralph (2-6-1968 – 5-28-2021) was born in San Diego and raised in Riverside where he attended Bryant and Grant Elementary, Central Middle, and graduated from North High School where he participated in basketball for 4 years. After high school he proudly served in the U.S. Army’s 1st Cavalry and fought in Desert Storm. After the military he attended Palomar College for 2 years and then was employed in their V.A. and Registration departments for 20 years. He is survived by his wife, Yasue O’Neil, mother Deborah Wagner, daughter Hannah Bree Baker, she graduated from San Diego State a day before her father’s death, his father Ralph H. Baker, step-mother Karen Baker, sister Kristan Solee, brother Jacob Baker, step-sister Jennifer Joniaux, step-son Brock O’Neil and step-son Brian O’Neil. After a very painful battle of squamous cell carcinoma he died peacefully in his home in Escondido. He loved fishing as it gave him his greatest happiness. In honor of this we will have a small family service with his ashes buried at sea off of Point Loma in San Diego on July 17, 2021.