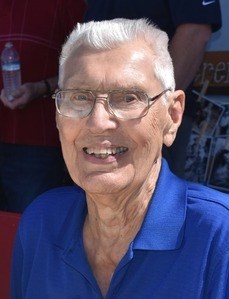 08-11-1926 – 12-02-2022 Following a life characterized by abiding faith, love of family, and desire to contribute to country and community, beloved husband, father, grandfather, great-grandfather, brother, and friend, Ralph Leo Smith joined his heavenly father on December 2, 2022 at the age of 96. Ralph was born on August 11, 1926 to Charles Oscar Smith and Florence (Rigg) Smith. As a young boy, Ralph and his family moved from Norco to Glen Avon with a team of horses pulling a wagon with their belongings. Throughout his school years, Ralph and his brothers helped with the family dairy and helped their father, a local developer, build houses throughout the Riverside area. At the age of 18, Ralph began service to his country during World War II. He was a proud veteran who served in the Pacific Theater of the war. Upon his return, Ralph’s integrity, steadfastness, and work ethic led him to become a pilar of his family and community. The pretty girl he met at the ice cream shop, Iola Bricker, became the love of his life and together they raised their four children and became active in community life. Ralph and his brothers, Walter and Stan became part of the family business, Glen Avon Lumber, and ran the business together until they retired, at which point, Ralph started a new business venture, Smith Storage. Ralph also served as a member of the Jurupa Unified School District, a member of the Glen Avon Volunteer Fire Department, a Boy Scout leader, and a long-time member and elder of Glen Avon Community Church which had been built by his father. He was also an incredible fast-pitch softball pitcher. Ralph was known for his good-naturedness, wisdom, kindness, and love of classic cars. However, the most defining features of Ralph are his faith and love of family. Nothing made Ralph happier than spending time with his family at the family’s beach house on Balboa Island. He taught his children and grandchildren how to boat, fish, and swim in the bay. His was a life of great love and service and he will be deeply missed. He joins his parents and brother, Walt, in eternal peace. He is survived by, and remains ever in the hearts of Iola, his wife of 74 years children Larry, Robin, Phil, and Brian, his daughters-in-law Donna, Jill, and Kris, brother Stan, sister Donna, and a legacy of 13 grandchildren, 19 great-grandchildren, and a great-great granddaughter.