Written by Night For Vets on June 7, 2022. Posted in Gone But Not Forgotten 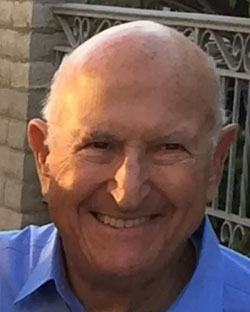 Dr. Ralph Villani lived a life full of adventure and passion for education. Ralph was born in Pasadena, California on May 31, 1930, and was the fourth child of Michael and Linda Villani. He had three sisters Mae, Renee, and Gloria.

Ralph enjoyed swimming, golfing with friends and travelling with his family. He spent several years learning Spanish while living in Latin American countries. Ralphs last great adventure was taking his family on an Alaskan cruise in 2015.

Ralph and his wife Barbara were both born and raised in Pasadena. They married in 1963 and started their family, before moving to Needles in 1966. Barbara was also an educator, teaching in elementary schools for 32 years. They have two children John and Linda, and six grandchildren Paige, Matthew, Daryn, Alivia, Ryan and Emma.

Ralph attended school in Pasadena through Pasadena City College and attended USC for a BA in Business in 1952. Ralph was a member of the California National Guard and active member of US Army during the Korean conflict from 1953 to 1955. He later returned to USC for an MA in Education. In 1981 he earned his Doctorate in Education from the University of Northern Colorado.

Ralph’s professional career extended over 36 years as a teacher, school principal, an assistant and a district superintendent. He started his career teaching at North High School in Torrance and taught at San Marino High School for ten years. Ralph was a popular teacher amongst the students and was often honored by graduating classes.

Dr. Villani’s passion for his career and education led to many years of service. Ralph was very active in supporting public education and community organizations. Before retiring and moving to Palm Springs in 1993, Villani was elected to the Board of Trustees of Santa Monica Community College. In 1992 he was appointed to serve a one-year term on the Los Angeles County Grand Jury. In June of 2012, he was elected to the Riverside County Board of Education for a four-year term. He also served on the Palm Springs Concert Association Board, California Retired Teachers Association Board and was an Area Director for CALRTA.

Much Love, we miss you Dad!