Written by Night For Vets on December 16, 2020. Posted in Gone But Not Forgotten 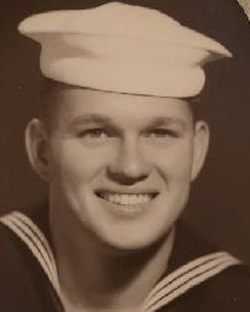 RAMON (RAY) LOYD ALLRED Ramon (Ray) Loyd Allred was born on May 3, 1930 in Ringling, Oklahoma to Herman and Vivian Irene Allred. Ray began attending elementary school in Avalon, Catalina Island where his father worked in the quarry developing rock for the L.A. Harbor. Since Ray’s family moved often, he never had the opportunity to complete two consecutive years at the same school until they moved to San Jacinto in 1945. Ray attended San Jacinto High School where he excelled academically, winning the Bausch and Lomb Science Award and was Senior Class President. He also played football and met the love of his life, Peggy, who he later married in 1950. After graduating from San Jacinto, Ray attended Riverside Community College. Ray served in the Navy during the Korean War (1950-1954) rising to the rank of Sonarman 3rd Class. Ray was known for having an incredible work ethic in both his career and personal life. He worked for 45 years as an Operating Engineer where he was a friend and mentor to many. Loyalty was important to Ray, if anyone mentioned they needed help, he would be there to do what he could, especially when it came to family. In his free time, he enjoyed repairing, restoring and driving old trucks. When Ray retired, his hobbies included, traveling across the country in the family R.V., square dancing with his wife as well as spending time with his children and grandchildren. Ray passed away peacefully on December 2, 2020. He was predeceased by his wife, Peggy, and is survived by his four children, Mark, Matt, Kristy and Kelly. Ray (Pa) also has twelve grandchildren, fourteen great grandchildren and one great-great grandson.