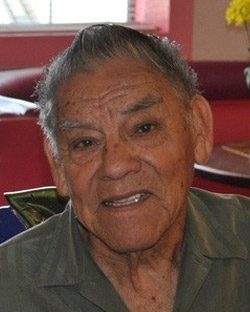 02/03/1930 – 09/21/2021 Raymond "Mongas" A Gonzalez passed away at home in San Dimas, Ca surrounded by his family on 09/21/2021. He was 91 yrs. old. Ray was born in Claremont, Ca on 02/03/1930. Ray worked as an agricultural worker from boyhood into adulthood to help support his family. Ray was proud to serve his country as an Infantryman in the Army during the Korean War. Upon his return Ray met and married Jennie his wife of 61 years. They started a family of their own and raised 7 children. Ray was preceded in death by his parents, Pedro and Delphina Gonzalez, his son Ray Jr, his 5 sisters, Cuca Guaracha, Juana Espinoza, Lenore Gonzales, Carmen Gonzalez, and Ramona Gonzalez, along with his 3 brothers, John, Gregory, and Bobby. Ray is survived by his wife Jennie; his children Al (Brenda), Susie (Don Cloughesy), Robert (Pam), Sam (Dina), Mary (Andrew Padilla) and Cecilia (Jeanne Amaya); his 19 grandchildren and 8 great grandchildren; his sisters Lupia Troy, Mary Helen Alvarez, Lilly Gonzalez and his brother Lupio (Carol).