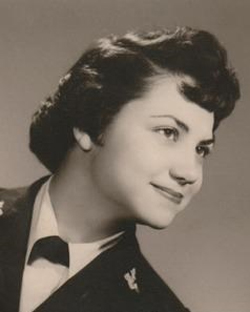 Age 84, passed away on January 12, 2021 in Corona, CA peacefully in her home. Regina was born in Albuquerque, NM to Robert and Barbara Moffett on March 13, 1936. She was the eldest of nine siblings. She was raised in a devout Catholic family and continued her faith throughout life. She moved to California when she was 18. Looking for an adventure she joined the Navy. This is where she met her future husband, Lawrence (Larry) Nelson in San Diego and the adventure began. They were married in 1954 and had five children Robert, Larry Dean, Jeff, Michele, and Danielle. She worked multiple jobs in Southern California while supporting her husband and family while he attended medical school. Notably she worked at Disneyland as a guide on the Storybook Land Canal Boats. After Larry established his practice in Corona she became a stay-at-home mom. As they became older Regina and Larry traveled all over the world. Regina was known for her fun and vivacious spirit with notable elegance and social graces. She lived a rich life with family, close friends, and adventure. Regina was preceded in death by her parents, Larry in 2015 and her daughter Danielle in 2011. Regina is survived by her children Robert, Anne, Larry Dean, Jeff, Michele and Wade; her grandchildren Sarah, Robbie, Jim, Grant, Bridger, and Alyson; and her great grandchildren Guy, Lily, and Ray. She will be missed by her siblings Betty, Rosemary, Estelle, Liz, Raymond, Jim, Babby, and Terry.