Written by Night For Vets on May 11, 2018. Posted in Gone But Not Forgotten 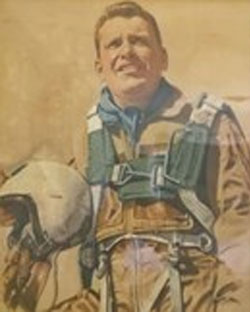 After a long and fruitful life, Rex Lawrence Poutre died peacefully on Thursday May 3, 2018. He was preceded in death by his wife LaVaughn Belva Poutre (Farmer) in 2014 after 71 years of marriage. Also preceding him was his daughter- in-law, Lisa, who died of cancer in 2013. Rex is survived by his children Michael Poutre (Gina), of Escondido, Susan Nichols (Bill), of Beaumont, and Kevin Poutre of Grand Terrace, as well as seven grandchildren, nine great- grandchildren, and nine great- great grandchildren.

Rex was born on the family farm in Concordia, Kansas on February 6, 1920 to Arthur Donas Poutre and Ronalda Nadeau Poutre (Beland). Rex’s older brother, Leo, was born in 1917, and his younger brother, Bob, in 1925.

After graduation from high school, Rex moved to Southern California, where his brother was stationed at March Field. Rex’s intention was to earn an Aeronautical Engineering degree, and parlay that into a commission as a flying officer in the U.S. Army Air Forces. In 1941, studying at Pasadena College when Pearl Harbor was attacked, Rex enlisted and entered the U.S. Army Flight Training Program.

In 1943, with new gold bars on his shoulders and wings on his chest, and with the government ready to send him overseas at any moment, Rex traveled back to Riverside to find a pretty, young woman he first met when he drove a school bus for the Riverside School District, and she was a Senior at Riverside Poly High. In November of 1943, Rex and LaVaughn were married at the Mission Inn. When he shipped out for England, she stayed at her parent’s home and carried to term their first child, Michael.

Rex’s 34 year career had him flying combat missions in P-51 Mustangs and P-47 Thunderbolts in Europe, F-80 shooting Stars in Korea, and A-1E Skyraiders in Viet-Nam. He worked on the Atlas Missile Program, test flew aircraft in the high desert at Muroc, was Deputy-Commander of Air Saftey at the Inspector General’s office under Brig. General Robin Olds, and ended his career still flying the T-39 Saberliner as often as he could.

After retirement in 1975, Rex rekindled his passion for riding motorcycles. He participated yearly, for 25 years, in the American Motorcycle Association’s two big tour-bike races, The Iron Butt and the Three Flags. He was a demon for speed. He will be missed.