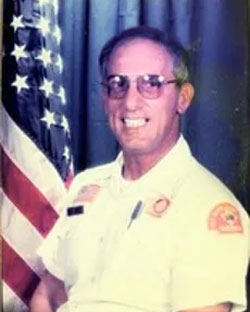 Richard “Bo” Bochicchio entered into eternal peace on October 24, 2022 at home in Victorville, CA with his Brother Joe at his side.

Richard was born September 28, 1946 in New Jersey to John and Catherine Bochicchio and was their 7th child of eight siblings in his family.

He graduated Clifton Sr. High School in News Jersey after which he joined the US Air Force for a career in Aircraft Maintenance serving 23 years attaining the rank of Captain. Richard is also a graduate of ST Leo’s College in Tampa, Florida obtaining a BA in business. He served many overseas assignments while serving in the Air Force in countries of Thailand, Korea, Turkey, Spain, and his favorite Italy. Richard received many Accommodation Medals for his outstanding achievements in his Air Force career. He retired in 1988 from the Air Force at George Air Force base in Victorville, CA and bought a home to reside in Victorville ever since.

With Victorville his new residence, Richard wanted to serve his new community by joining the San Bernardino County Sheriff Department Volunteer Citizen on Patrol (C.O.P) unit in Victorville and served for 31 years. During his service in C.O.P., Richard was awarded Certificates from the Sheriff Dept. for his work and dedication including a Volunteer Gold Sheriff Badge with over 10,000 hours for the dedication of camaraderie of laughs he had with the members and Sheriffs. “BO” as he was called in the Department loved making people laugh.

Richard is survived by his youngest brother Joe Buccinio from New Jersey and numerous nieces and nephews. He is preceded in death by his parents, brothers William Bochicchio and John Buccinio, sisters Jeanne Buccinio, MaryAnn Meals, Rosalie Buccinio, and Carrie Lee.

He will be missed for his humor and great smile.