Written by Night For Vets on July 1, 2021. Posted in Gone But Not Forgotten 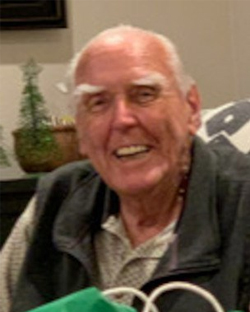 With profound sadness we share news of the passing of Richard L. Gilchrist, devoted husband of Betty Ann Gilchrist on November 28, 2020, at Eisenhower Medical Center due to natural causes. His survivors include Betty Gilchrist, Pam Cleland-Broyles (daughter), John Broyles (son-in-law) and Jeffrey (Jesse) James, Jodi James (Son and daughter-in-law) and Ria Cleland (granddaughter); he was preceded in death by his grandson Matthew James. Other family members include his sister Marianne Thomas, nephew Mark Thomas and Susan Thomas (wife), their son Mark of Bedford, Pennsylvania.

Born August 30, 1931 – 2020, in Bedford, Pennsylvania, Dick joined the Army (after graduating from high school) and served in Korea. Upon his discharge, he made his home and career in Manhattan Beach, California. He was a respected and successful State Farm insurance broker for forty years. After marrying in 1971, Dick (an avid sailer) and Betty spent their weekends sailing off the coast of Southern California, and enjoyed frequent trips to Catalina Island with their community of sailing friends.

In the 1980’s Dick and Betty turned to the road and began their exploration of the US and Canada in their RV. Dick loved finding beautiful spots in nature: mountains, rivers, lakes, and plains, and even a few big cities. They ventured to Dick’s high school reunion in Pennsylvania and Betty’s in Oklahoma re-connecting with friends from their pasts.

Their love affair with the desert of the Coachella Valley began by spending weekends playing tennis and golf in Indio, and soon bought a home at Suncrest Country Club in Palm Desert. For many years, they travelled back and forth between Manhattan Beach and Palm Desert on a weekly basis, until Dick retired in 1990. Dick became well known for the themed parties he planned and held for their wonderful friends; his New Year’s Eve, Super Bowl, and Halloween parties are legendary! A huge supporter of his granddaughter Ria, he never missed a dance recital, school award assembly, softball game, or opportunity to help her with science fair projects.

When macular degeneration took his eyesight and he could no longer drive, Dick became an active volunteer with Braille Institute of Rancho Mirage. He taught computer classes for other visually impaired people, and organized a cadre of Suncrest volunteers to host an annual golf outing and luncheon for adventuresome Braille participants! He participated in many outdoor activities through the Veteran’s Administration. He continued to live life to the fullest (despite being visually impaired) with the support of Betty.

At 6’7″, Dick will remain in our hearts and minds bigger than life! We will miss his loving bear hugs and strong hand shakes, and remember his kind, caring, attentive, generous and loving ways. We feel blessed to call him husband, father, POP, brother, uncle, and dear friend; his passing will leave a large void in our lives.