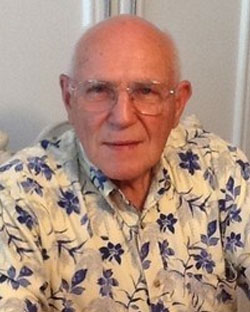 Richard “Dick” Hess died Sunday, December 20, 2020, of natural causes, just after his 90th birthday. He was surrounded by his family. Dick was born in 1930 in Laona, Wisconsin to Frank A. and Florence A. Hess. He enjoyed a life of adventure with his older brother Robert “Bob”, and his younger brother Frank and sister Delores in Wisconsin. Dick graduated from the University of Wisconsin Platteville in 1954 with a degree in Industrial Arts. He served his country in the U.S. Army from 1954 to 1956. He began his career as a high school industrial arts teacher in Beloit, Wisconsin, while simultaneously earning his Master’s Degree in Industrial Education from Northern Illinois University. In 1961, he moved to Ontario, California to start a teaching job at Chaffey High School. After the move to California, he became actively involved in the Catholic Alumni Club where he served as President and met Mary Ellen Sanner who was the Secretary. On Valentine’s Day 1963, Dick proposed to Mary Ellen and they were married in July. They moved into a home in Ontario, California in June 1964 where Dick could walk or, occasionally, drive his 1960 Black Volkswagen Bug to work. He was a beloved teacher for more than three decades at Chaffey High School. Dick was well known for his creative, mechanical mind and a wonderful sense of humor. He could fix and build anything with the many tools he kept in his garage and every encounter with Dick was peppered with one of his corny jokes! His volunteer hours for charity and service organizations were extensive. Dick is survived by Mary Ellen, his daughters Cynthia M. Tessin and Julie A. Chevraux (Matt), and son Joseph R. Hess (Isabel), six grandchildren Thomas, John, Garrett, Sarah, Ryan, and Alyssa, his brother Robert G. Hess (Phyllis), his sister Delores A. Triest, and many nieces, nephews, and cousins. Dick was predeceased by his parents and brother Frank O. Hess. Additional information and reflections may be found on his memorial website: https://www.reflectingonmemories.com/obituaries/Richard-Hess-13/