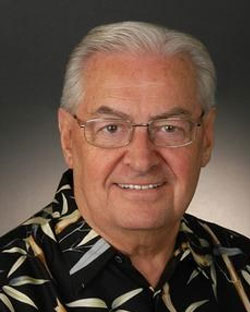 Richard A. “Dick” Johnson, 84, long-time local Realtor, passed away peacefully on Monday, June 1, 2020. He was just two weeks shy of turning 85. In 1954, a 19-year-old farm boy from Clarkfield, MN (population less than 1,000) enlisted in the United States Air Force to escape farm life and bitter Minnesota winters. After spending a little over four years working and traveling in the U.S. and throughout Europe with the U.S. Air Force, he made a cross-country vacation drive to visit his eldest brother in Riverside, California in the spring of 1960 and never left; he thought he had found paradise. He often commented that the most beautiful thing he had ever seen were snow-capped mountains in the distance with palm trees blanketing the foreground. This was as close to the snow as he ever wanted to be again. Once settled in Riverside, Dick was employed with Rohr Aircraft performing data processing before becoming employed with the City of Riverside where he worked for approximately 15 years as the Director of Data Processing prior to resigning in March 1973 to pursue his real estate license, which came out of a dare more than an interest of his own. It did not take him long to realize that real estate was his true passion. He took great pleasure assisting his clients and being a trusted advocate for them, as well as being a resource to his fellow Realtors. Dick was proud of being a Catholic convert. He loved God, his faith, and his church. In 1997, he was instrumental in securing $2.1M in funding for St. Catherine’s of Alexandria’s capital campaign to fund improvements to the parish school, parish hall and ministry center. A mission he had little time for while managing a busy real estate career but something he felt called to do. This was one of his proudest achievements. Dick also had a passion for anything tropical and especially Hawaii, evidenced by his signature Hawaiian shirts he sported proudly regardless of the occasion. He loved cruises to the islands and bowling for numerous years with the Lads and Lassies Vegas league. Dick is survived by his loving wife of 55+ years, Sylvia Johnson, daughter, Natalie Johnson, son, Todd Johnson, grandson, Andrew Johnson, granddaughter, Kelsey Johnson, two former daughters-in-law who were like daughters to him, Amy King and Jamie Johnson, sisters, Dona Sather, Lois Knudson, and Elizabeth Dack, and several sisters- and brothers-in-law, as well as numerous nieces and nephews, who he was so proud of and loved so much.