Written by Night For Vets on January 3, 2019. Posted in Gone But Not Forgotten 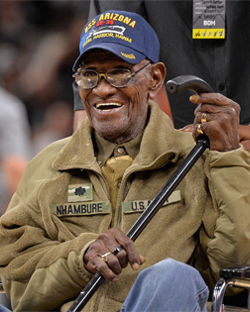 Richard Overton, who was the nation’s oldest World War II veteran and honored by President Barack Obama, died on Thursday at a rehabilitation facility near his home in Austin, Tex. He was 112.

His death was confirmed by Shirley Overton, whose husband was Mr. Overton’s cousin and longtime caretaker. Mr. Overton had been hospitalized with pneumonia but was released on Christmas Eve, she said.

Mr. Overton was in his 30s when he volunteered for the Army and was at Pearl Harbor just after the Japanese attack in 1941. He served in the all-black 1887th Engineer Aviation Battalion in the Pacific Theater.

He told The Austin American-Statesman in 2013 that combat had helped his segregated unit gain acceptance.

“When we got out in the war, we were all together,” he said. “There wasn’t no discrimination there. We were hugging each other — darn near kissing each other.” Lives depended on it, he said.

In recent years his birthday drew national attention, and strangers would stop by his house to meet him.

Mr. Overton met President Obama at the White House in 2013, and the president honored him at a Veterans Day ceremony at Arlington National Cemetery.

Mr. Obama added: “When the war ended, Richard headed home to Texas to a nation bitterly divided by race. And his service on the battlefield was not always matched by the respect that he deserved at home. But this veteran held his head high. He carried on and lived his life with honor and dignity.”

Mr. Overton was born on May 11, 1906, near Austin. His grandfather had been a slave in Tennessee before moving to Texas after emancipation, and Mr. Overton grew up amid the indignities and inequality of the segregated South.

He returned to Austin after the war and worked in a furniture store and as a courier at the state Capitol before retiring in his 80s.

He once said that one secret to his long life was smoking cigars and drinking whiskey, which he was often found doing on the porch of his Austin home.

He was married twice but had no children. Information about survivors was not immediately available.

Mr. Overton remained active until recently. This year he took a private tour of the National Museum of African American History and Culture in Washington.

The Austin City Council recognized Mr. Overton’s contributions to the state and country by proclaiming a day in his honor and ceremonially renaming the street he lived on after him.

In a statement, Gov. Greg Abbott of Texas said, “Richard Overton made us proud to be Texans and proud to be Americans.”