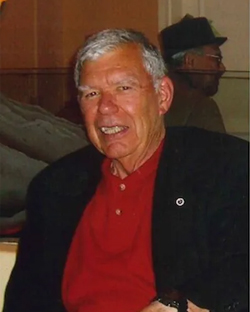 Richard Petroff passed away on September 22, 2021 of Alzheimer’s disease. Richard was born in Waukegan Illinois in 1933. He is a graduate of Purdue University and received his M.A. from the Naval Post Graduate School. Richard served 27 years in the United States Marines Corps before retiring in 1981 with a rank of Lt. Colonel. During his time with the Corps, he had numerous overseas deployments including a tour of duty in Vietnam where he was awarded the Bronze Star with V for meritorious service and valor during combat action. Upon leaving the Marine Corps Richard spent 10 years in the Aerospace industry in Southern California. Richard and his family lived in Oceanside for 23 years before moving to Sun City, Palm Desert in 1996. He led an active life in retirement where he was the president of the Financial Club, as well as the Wine Tasting Club. He was also a volunteer at Eisenhower Medical Center, and a volunteer at the Palm Springs International Film Festival. Richard was preceded in death by his mother Bonka, father Christ, and sister Ellen. He is survived by his wife of 57 years Jeanette, daughter Lydia Petroff, son Clay Petroff and wife Agnieszka, daughter Lisa Howard and husband Bert, and son Chris Petroff and wife Jill, as well as grandchildren, Corey Leal, Alex Petroff, Lauren Petroff, Luke Petroff, Taylor Petroff, Jake Petroff and Emily Howard.