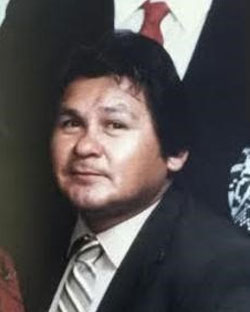 It is with great sadness we announce the passing of Richard Leo Salgado Sr., on May 14, 2022 in Indio, California. Born on June 5,1944 at the Soboba Indian Hospital to Ernest Sr and Fidelia Juarez Salgado. Richard was raised on the Soboba Indian Reservation along with his five siblings. He was a proud member of the Soboba Band of Luise¤o Indians. He was preceded in death by his parents, sister Rose Salgado, brother Robert (Bobby) Salgado Sr., and grandson Daniel Salgado. He is survived by his brother Ernie Salgado Jr., sisters Raina Maciel and Francie Diaz, son Richard Salgado Jr., daughters Dora Salgado, Maureen Salgado Hernandez, seven grandchildren: Jorge Hernandez Jr., Angela Hernandez, Floyd Ruiz, Douglas Ruiz Jr, Steven Hernandez Sr, Cheyenne Salgado, Clarise Salgado, 14 great grandchildren and many aunts, nieces, nephews, and cousins. Richard attended Hemet High School where he played varsity football. At the age of 19, he enlisted in the United States Army where he trained at Fort Benning in Georgia, became a paratrooper and later was deployed to Vietnam. Upon his return home, he was faced with many obstacles and challenges as the social climate had changed in regard to U.S. involvement in the Vietnam war and many of our veterans were not welcomed back home with open arms. Richard was a generous person, always willing to help. He was very proud and supportive of the accomplishments of his family and Tribe.