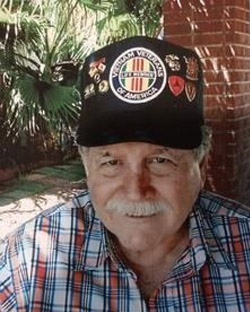 Richard Francis "Rick" Sapien was born on December 22, 1946 in Hollywood, CA, and passed away on May 1, 2021. He was preceded in death by his parents Ramon Sapien and Dorothy Beutenmiller. Six years later his brother Greg was born and completed their family. Brought up in Canoga Park, Rick and Greg had happy childhoods. Rich was in Little League baseball, Popwarner football and continued through high school. The family was active in the catholic church, the boys attended catholic school and Rich was an alter boy. After graduating, attending 2 years at Pierce College and working at Litton Enterprises, Rick joined the United States Marine Corps. He was in combat for 13 months in Vietnam, Khe Sahn, and other areas in Vietnam. He enlisted in 1965 and was discharged in 1969. On Friday, the 13th of June 1969 he met the love of his life, Linda, on a blind date in Hermosa Beach arranged by a mutual friend. They married on April 24, 1970 and shared 51 years together raising two children, Brigette and Brian. The couple were active life members of the VFW (Post 10267), The American Legion (Post 500) and Vietnam Veterans of America (Chapter 47). Rich spent 20 years as a structural ironworker, Local 433 and after retiring worked as head custodian for Jurupa Unified School District until retirement. Rick and Linda became "Papa" and "Grammy" to 4 grandchildren: Brigette’s 2 daughters, Summer and Marisa Staley and Brian’s 2 sons, Brody and Kaleb Sapien. The family continues to grow with great grandsons Collin and Craig Bacha and great granddaughter Lilly Staley. On the way is Waylon Blevins, expected arrival in September. Rick is survived by immediate family listed as well as his brother Greg and sister-in-law Lorri of Idaho, sisters-in-law Debra Howell (Greg) in Maryland and Joelle Winner of Running Springs as well as nephews and a niece.