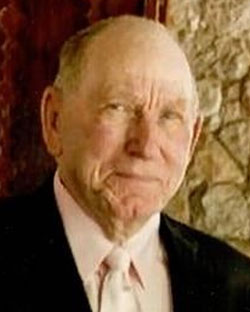 Richard “Dick” Waitschies, 88, passed away on May 14, 2022 in San Bernardino, CA. Dick was born in Milwaukee, Wisconsin and moved to a family farm in Peerless, Montana at age 12. He graduated from Scobey High School in 1951 and then served in the Marine Corps during the Korean War. After his honorable discharge he settled in San Bernardino, where he met Shirlene Preston on a blind date. They married in 1959 and raised four children. Dick and Shirlene celebrated 55 years together before her passing in 2O14. Dick worked for Lockheed Propulsion for 18 years and San Bernardino City Schools for 20 years before retiring in 1998. He loved retirement and spent his time tinkering around the ranch in Utah, reading, watching Notre Dame football and spending time with family. Dick is survived by his sister, Betty Hotaling, and his children Diana, Richard (Debby), Michael (Kathy), and Laura (Andy) Wilcox. Also surviving him are his sister-in-law, Joyce (Fred) Dimmitt, nine grandchildren and four great-grandchildren.