Written by Night For Vets on February 19, 2019. Posted in Gone But Not Forgotten 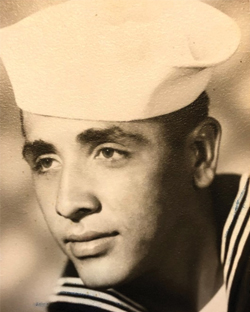 On Monday February 11th, 2019, Robert “Bobby” Mendoza, loving husband, father, grandfather, great-grandfather, and brother, passed away at the age of 85. Bobby was born on May 22nd, 1933 in Alberhill, California, to Ramon and Rosario Mendoza. He attended school in Alberhill through the 8th grade, and then attended Elsinore High School where he was a stand-out baseball and football player. He was later inducted into the Elsinore High School Hall of Fame where he received recognition as “Outstanding Athlete.” After graduation, Bobby enlisted in the United States Navy. He served proudly for four years. After the Navy, Bobby worked at Pacific Clay Products in Alberhill for 45 years.

On November 8th, 1958, he married his longtime sweetheart, Vera Rios, whom he met at the baseball field in Lake Elsinore at the age of 15. They raised four children, Dolores, David, Linda, and Gloria.

Throughout his life, Bobby always had a love for baseball. He coached little league baseball for many years, enjoyed playing Slow-pitch, and was a die-hard Dodgers fan.

Bobby loved spending time with his family, going to Laughlin, Dodger games, and at any given time you would see him on his daily walks in Lake Elsinore. He loved his grandchildren with all of his heart and loved having them over every Sunday.

Bobby is survived by his wife Vera, his four children and their spouses, nine grandchildren, seven great-grandchildren, his brother Leonardo, sisters Lupe and Mary, as well as several nieces and nephews.