Written by Night For Vets on September 4, 2018. Posted in Gone But Not Forgotten 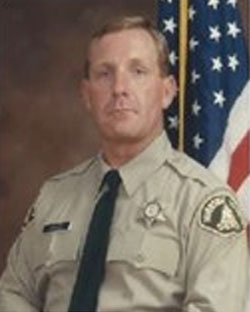 Robert (Bob) E. Crosby Jr, also known as “BC”. Bob passed away peacefully on August 27, 2018, with his family at his side. Bob is survived by his son (Charlie); daughter (Mandy); daughter-in-law (Katie) and grandson (Logan), aka (“Champ”) – as well as sisters (Kerry, Suzanne, Robin, Molly) and brother (John). Bob was born March, 1952 in Columbus, Ohio to Robert and Doris Crosby.

Bob proudly served his country as an E4 in the United States Army, including time stationed in Germany. On return to civilian life, Bob worked for Alpha Beta and Wang Industries but found his true vocation in law enforcement. Bob served as a Riverside County Deputy Sheriff. Bob went on to fulfill a long and rewarding career with the Fontana Police Department in the Code Enforcement Division. Bob was well known for his ‘one liners’ as well as his salutary “grunt”.