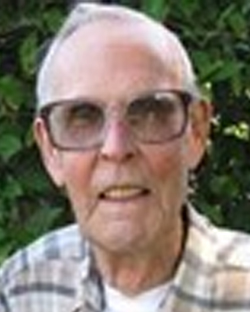 ROBERT (BOB) EID, having reached the age of 100 last fall, was called home by the Lord on Feb 24, 2020 in Riverside, CA. Bob was born Sep 1, 1919, in St. Cloud, Minnesota and subsequently lived in and was schooled in Wisconsin. WWII interrupted his education. Bob served in the Army Engineers on Oahu and was a Pearl Harbor survivor.

After his discharge from the Army, Bob met his wife Dorothy at a paper mill where they both worked. After their marriage on Feb. 12, 1945, they moved to Madison, Wisc., where Bob entered the Civil Engineering program at the University of Wisc.

In 1950, engineering degree in hand, they moved to Great Falls, Montana, where Bob was employed by the Bureau of Reclamation. In 1954, they moved to Riverside, with Bob going to work for Riverside Co. Flood Control and Water Conservation District. It was there, in 1955, that Bob built the home they never left. They raised two sons there and very much enjoyed the annual camping vacations together as family.

In retirement, Bob and Dorothy continued that practice through extended RV trips through the mountains of the western states. For many years, they would spend the fall months in the Mammoth Lakes area, staying until the first snows chased them back home. Dorothy, Bob’s wife of 65 years, preceded him in death in 2009.

Bob is survived by sons Dennis and Ronald and his wife Lynne and four grandchildren.