Written by Night For Vets on June 18, 2018. Posted in Gone But Not Forgotten 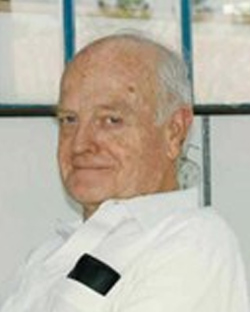 Robert James Galbreath, beloved husband of the late Laraine Luverne Flodine and long-time fixture in the Riverside community, passed away on Thursday, June 7, 2018, age 94. Born on December 16, 1923, in Loma Linda, California, Bob was the son of Robert Watson Galbreath, a fireman on the Santa Fe Railroad, and Bessie Lee Hill. He spent his youth in San Bernardino, Los Angeles, Orange, and Riverside. He graduated from San Bernardino High School in 1941 and attended San Bernardino Valley College.

He served in the Army Air Corps from 1942 to 1945, first in the 1st Motion Picture Unit in Culver City, where he was promoted to Staff Sergeant, and later at March Field, then at Camp Kilmer, New Jersey. He studied military aviation at Miami Beach, Florida, and at Syracuse University. He went to the Armory School at Lowry Field in Denver and became a B-29 remote control instructor in a Mobile Training Unit.

After the war ended, Bob worked for grocery stores, the California Department of Employment, and for Orange Empire Co-Op. He was married to Evelyn Nichols from 1952 to 1968. But his life really began in 1968, when he reunited with his true love and soulmate, Laraine. Bob and Laraine were married in 1969 and were inseparable until her death in 1980. They lived in downtown Riverside, and Bob referred to their small home on Vine Street as “heaven on earth.” He often said that he found his highest self in Laraine and he mourned her loss for the rest of his life. Bob volunteered for Riverside Hospice for six years after Laraine’s death.

The quintessential outside salesman, Bob’s career in membership and sales included work with the California Taxpayers Association, Western Mobile Home Association, an advertising company, and six years with the Greater Riverside Chambers of Commerce. He was also a proud Mason and was a member of several local lodges.

He moved to Canyon Crest in 1990, and became known locally as “Mr. G.,” a frequent presence in Riverside coffee houses and restaurants. He was a voracious reader and a regular patron of the Riverside Public Library. He was particularly interested in philosophy and literature, and he delighted in conversation and intellectual discourse. He spent daytime hours at Panera Bread at the Riverside Plaza and Starbucks in Canyon Crest. In the evening he dined at his beloved Mario’s Place in Riverside, where the Palagi family considered him as one of their own and reserved a special seat at the bar for him.