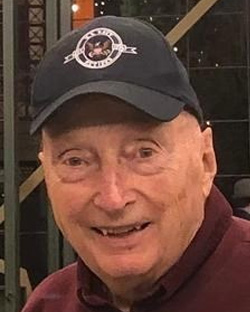 Robert John Gampp, passed away August 28, 2021, Redlands, due to heart failure. He contracted Covid-19 while receiving care in the hospital for heart issues. Bob’s health was further complicated when he contracted Delta pneumonia. He had been vaccinated. First born son to John and Elsie Gampp (June 3, 1935), Bob was proud to be first-generation American to hardworking German immigrants. His father owned a corner butcher shop in Nassau County, New York, and Bob grew up working alongside his parents mastering the art of making traditional German sausages and other deli specialties. Bob earned his college degree on the GI bill after serving in the US Navy. He was stationed on the USS Bushnell in Key West, Florida, as a torpedoman’s mate. He was proud to serve his country post Korean war and was inspired to go to engineering school because of what he learned in the Navy. He spent the majority of his 32-year career in R & D for Charles Stark Draper Labs in Cambridge, MA. With a passion for the northeast woods, Bob and his young family invested love and time in a 75-acre tree farm in New Hampshire, where weekends were spent clearing trees and building a gambrel barn with living quarters, in the 1970’s. Bob’s work brought him to Norton AFB (BMO) in 1981 where he represented Draper Labs on the guidance system for the MX missile project. He spent his retirement years living on two coasts, enjoying warm winters in Redlands, and working on his New Hampshire tree farm during the sunny seasons. He loved being a husband, father and grandpa; and his greatest enjoyment was that of being a forester. He planted over 300 Sierra redwoods on his NH farm, where a few redwoods thrive today. Bob is survived by his wife of 35 years, Janet James Gampp (Redlands), and his children Terry Gampp (Redlands) and Lorrie Gampp Dahlen (Marshville, MA). Proceeded in death by his brother Herbert Gampp (Dover, DE).