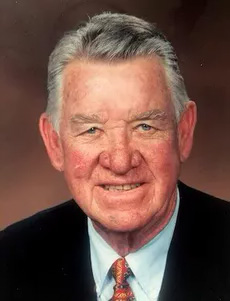 A long-time resident of Rancho Mirage and Los Altos, Robert (Bob) Pearson passed away at age 94 on December 21, 2022, in Walnut Creek, California. Bob and his wife of 65 years, Luana Manwill Pearson, resided at The Springs Club in Rancho Mirage for 20 years from 2000 to 2020, where they relocated after Bob retired. With a mischievous twinkle in his eye and warm smile, Bob loved to laugh and enjoyed life to the fullest. He would sing Sinatra at the piano bar and remained witty, dedicated, loving, and charming to the very end. Born in Salt Lake City on July 11, 1928, to Henning Pearson (Persson) and Lydia Lindquist Pearson, both of Skane, Sweden, Bob was the youngest of five boys and one sister. Bob graduated from South High School, spent time in the military, then went to the University of Utah, where he competed on the Golf Team and was a member of Pi Kappa Alpha Fraternity. Growing up in Salt Lake City, Bob worked as a caddie and assistant greenskeeper at Forest Dale Golf Course, where his love of golf was cultivated. Although from a Lutheran family, Bob was influenced by the Mormon Community. He played basketball at Edgehill Ward, and as a schoolboy, Bob was chosen to sing with a youth choral group that performed at the Mormon Tabernacle. Bob served his country proudly by enlisting in the US Navy at age 17 and following ROTC at the University of Utah, he was commissioned as a Second Lieutenant in the US Air Force. Ever the competitor, he was first in his flight training class to fly solo. As a successful businessman, Bob owned Shell Service Stations in the Palo Alto / Los Altos area. His employees loved him for his loyalty, generosity and acts of kindness. Bob’s customers became his friends and his friends became his customers, since he was always caring, honest and fair. Luana and Bob enjoyed travels to Europe, Asia, Australia, New Zealand, and Mexico. They particularly loved their trips to Hawaii for golf, fun in the sun, and a few tropical libations. Luana and Bob treasured their many friends and special times with family, especially ski trips, Carmel golf weekends, Aptos beach vacations, cruises, and Stanford football games with “The Screezers” (do not ask). The defining feature of Bob’s life was his love for golf. He was a champion golfer who qualified and competed in the USGA Senior Open (his locker was next to Arnold Palmer’s at Portland Golf Club) and the USGA Senior Amateur in Isle of Palms, South Carolina. During his lifetime, Bob shot six hole-in-ones. Along with Golf, Bob was an accomplished all-around athlete, who truly enjoyed skiing and playing tennis with friends and family. Bob served on The Springs Club Board of Directors and won a Club Championship. It was always Bob’s dream to join The Springs Club to reunite with his University of Utah golf buddies and play big money games with his regular group (“The Rollers”). He also loved the camaraderie of playing poker and bridge in the Club House. Prior to Rancho Mirage, Bob and Luana lived in Los Altos, California, where they were members of Los Altos Golf and Country Club for 35 years, joining in 1965. Bob won The Club Championship six times and also won The Senior Club Championship eight consecutive years. Being active in the community while raising his sons, Bob coached his boys’ sports teams and served as a Scout Master, attending the 1973 National Boy Scout Jamboree at Farragut State Park in Idaho (a two-day troop caravan with a station wagon full of rowdy scouts and no back-up driver). Bob was an adoring, dedicated husband and a proud father, who always put his family first. While raising his three sons in Cupertino, he emphasized community, charity, hard work, athletics and education. His sons relished family time, and being brothers, they were naturally competitive, while simultaneously supporting each other between the occasional altercation. All his sons earned varsity letters in High School and each one received a Bachelor’s Degree, which was a testament to the love and support of their parents. Throughout the community, it was well known that if you were friends with one member of the Pearson Family, you were friends with all of them. Bob loved Scotland and Ireland. In 2018 at age 90 Bob returned to Scotland, where the North Berwick Golf Club hosted Bob for his hole-in-one 30 years earlier. The Royal and Ancient Golf Club (R&A) presented Bob with a medal which he wore proudly thereafter while cruising the British Isles. Always authentic, Bob took a sincere interest in others. He was a gentleman and golf purist who believed in tradition, honor, fast play (ready golf), and etiquette (tuck in your shirt and take your hat off in the club house). Along with his wife Luana, Bob is survived by his three sons who all reside in California: Scott (Kate) of Newport Beach; Tom (Cindy) of Orinda; and Bill (Lisa) of Palm Desert. In addition to his wife and sons, he is survived by his five grandchildren Will, Cole, Charlotte, Jack, and Christine, all of whom he loved dearly and his love they returned. Bob is also survived by his beloved older brother, Buddy Donald Pearson, who is 97 years old and was his original golf partner. Bob is an inspiration for all.