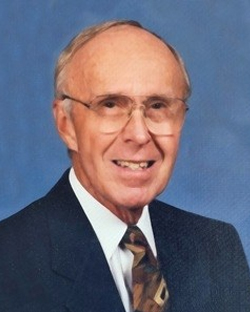 Robert (Bob) Frank Leonard Lifetime Redlands resident Robert (Bob) Frank Leonard, a WWII Marine veteran and avid tennis player, passed away at Plymouth Village in Redlands, California on September 10, 2021 at the age of 99. He was the middle of three sons of James S. and Clara Leonard born on March 2, 1922 at Redlands Community Hospital. He attended Redlands schools and graduated from Redlands High School and the University of Redlands where he was a proud Kappa Sigma Sigma. He excelled in sports and was a letterman in both basketball and tennis. After the outbreak of World War II he enlisted in the United States Marine Corps in 1942 where he was enrolled in the V-12 officer program, receiving military training while still attending classes at the university. In 1943 he transferred to Parris Island, South Carolina and then Quantico, Virginia for additional training where he received his commission as a 2nd Lieutenant. In 1944 Lt. Leonard was sent to the South Pacific where in March 1945 he was assigned command of a mortar platoon in Company A, 1st Battalion, 7th Regiment, 1st Marine Division. On April 1, 1945 he landed on the beaches in the invasion of Okinawa. He led his platoon in assaults at Dakeshi and Kunishi Ridges. Lt. Leonard was awarded the Purple Heart. He started his career in the insurance business, but it was interrupted when he was called back in to the Marine Corps during the Korean War. Promoted to Captain, he trained Marines at Camp Pendleton, California. His long successful career as a CLU, chartered life underwriter, with Manulife Insurance Co. earned him the title top 25 producers worldwide. He had over 1000 clients and at age 90 was still involved in the business. He was president of Orange Belt Life Underwriters and president of Arrowhead Life Underwriters. He was married to his wife Arlene for 62 years living in Redlands and raising their two children. They enjoyed traveling together to tennis tournaments and foreign countries worldwide. He raised funds for the YMCA for 50 years. He was an Optimist Club member since 1946 where he loved the creed and walked the talk. He served two terms on Redlands Community Hospital Board. He was a Redlands Chamber of Commerce member for many years and served as VP in charge of new membership. He started playing tennis when he was 14 years old. He played for the University of Redlands and continued to play into his mid 80’s. He was ranked in the senior circuit in southern CA. He helped start the Tennis Junior Development Program with Jim Verdick which was first sponsored by the Optimist Club and later by the Redlands Racquet Club. He played recreational tennis in 10 countries. He was a long-time member of the First Presbyterian Church in Redlands and later became a loyal member of the First Baptist Church in Redlands. He was a philanthropist that gave generously to the Redlands YMCA and the University of Redlands. He is survived by his two children, Larry and Susan, one grandchild, and two great grandchildren. He enjoyed being with a close and devoted family and will be greatly missed by all that loved and respected him. Special thanks to Plymouth Village in Redlands where he lived for 12 years.