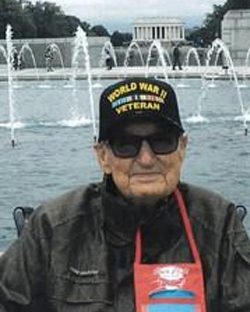 Robert (Bob) Lortie, 99, of Hemet, CA, passed away peacefully with both of his sons at his side on April 18, 2020. Bob is survived by his sons, David Lortie and Dale Lortie (Karen) and his companion, Nita Nation. He was preceded in death by his wife Ruth, and his second wife, Peggy, his parents, Nelson and Clara Lortie, and his sister, Phyllis Owens. Bob served in the Coast Guard during WWII/Pacific Theater. After the war he finished his degree in accounting and later earned his Masters of Business Adminstration. His career included working at the Claremont Colleges, March AFB, and Lowry AFB in Colorado as an accountant and comptroller. In retirement he enjoyed traveling in his RV and many trips overseas. Bob will be remembered as a loyal son, husband, father, grandfather and friend. He was a devout Christian and active in the church along with doing charity work for years helping seniors with taxes.