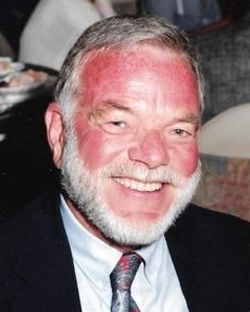 Robert McGovern sadly passed away on January 16, 2021 at the age of 81. Bob was born in Irvington, NJ in 1939 to John and Doris McGovern. He moved to California as a small child and grew up in the Riverside area. Bob graduated Poly High School in Riverside in 1957. After graduation, he enlisted in the United States Navy and served one enlistment. After the Navy Bob worked in various accounting jobs before becoming a loan officer for Security National Bank. He entered the construction business as the Director of Purchasing. He retired from Van Daele Development after nineteen years in 2008. Bob’s pride and joy was his family. He is survived by his wife, Sandra, daughter Renee Trowbridge (Tom) and daughter Stacy Perry (Ray) and son Todd McCreight (Jennifer). Bob had nine grandchildren Jaime Simmons, Nicholas McGhee, Cameron and Carson Trowbridge, Kaitlin, Kylie, and Blake Perry, and Taylor and Hunter McCreight. Bob also had five great grandchildren. Bob is also survived by two brothers, Richard and Raymond McGovern (Kathy) and a sister Jessica Libby (Don). Bob is preceded in death by his parents, John and Doris McGovern, two daughters, Dawn Wright and Sandra McGhee and sister-in-law, Roxy McGovern. Bob enjoyed the beach, golfing with his friends and traveling with his wife Sandi. They enjoyed many road trips over the years and saw most of the United States together. Bob also loved a good bottle of wine or a day wine tasting with family and friends. He will be greatly missed by all who loved him.