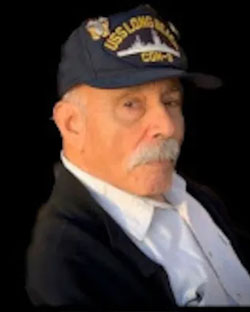 Robert “Bob” Anthony Ocon, a proud veteran of the United States Navy, died on May 5, 2022, surrounded by family, from complications associated with Parkinson’s Disease.

The son of Henry and Sophie Ocon, Bob grew up in Brooklyn, New York. He was born November 14, 1940, in Brooklyn and attended St. John’s University for his undergraduate degree, and Purdue University, earning a masters degree in mathematics.

In 1964, Bob received his officers commission and joined the crew of the USS Long Beach, a nuclear-powered guided missile cruiser. Bob valued his service and attained the rank of LTJG. He served with honor during the Vietnam War Campaign, where he was awarded the American Defense Service Medal, Vietnam Service Medal, and the Republic of Vietnam Campaign Medal

Bob’s experience in the U.S. Navy played a very important role in his life. His lessons of self-motivation, discipline and teamwork led to a successful career in computer technology for over 30 years.

Bob was preceded in death by his parents, and brother Henry Ocon. He is survived by his wife Lila, children, Jim, Paige, and Leslie. His loved ones will remember Bob’s supportive nature, selflessness and caring personality.