Written by Night For Vets on April 21, 2020. Posted in Gone But Not Forgotten 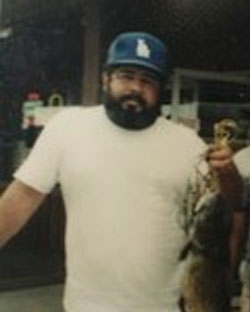 Robert Pete Perez, of Hesperia, CA, passed away April 4, 2020 surrounded by his loved ones. Robert was born on September 27, 1949 to Pete and Jennie Perez in Upland,CA. Robert grew up in Cucamonga and graduated from Alta Loma High School. After High School he enlisted in the United States Army and served our country for 4 years. When Robert returned home he met his wife, Lillian and they got married and started a family. They relocated to the High Desert in 1981. Robert started working at CCWD in 1971. He worked there for 30 years while also attending college and earned his State of CA DHS Certified Water Treatment Operator Grade T5. Robert retired from CCWD as Manager of Production and Water Treatment in 2001. Robert was an accomplished hunter. His favorite time of year was hunting season. He always came home with something to show for it. He loved to fish and spent the majority of his retirement fishing with his father and grandchildren. His hobbies also included gambling, catching up on the Dodgers and spending time with his grandchildren. Robert was a strong, kind, loving man who will be missed by many. He was a man of faith and is now home with our Lord. Robert was preceded in death by his parents, Pete and Jennie Perez, and his granddaughter, Angel Vasquez. He is survived by his wife of 49 years Lillian Perez; his 4 daughters Jennifer Minjarez, Olivia Gilbert, Jessica Silance (husband Ed Silance) and Roberta Chavez (husband Joseph Chavez); His 16 grandchildren and 8 great grandchildren; and his sister Herlinda Leyva.