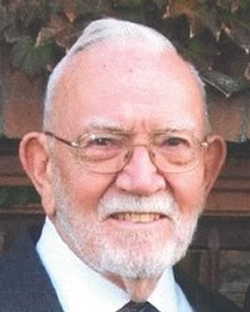 Robert (Bob) Glenn Pote July 31, 1927 – August 20, 2021 Robert (Bob) Glenn Pote, 94, of Redlands, CA passed away August 20, 2021. He was the loving husband of Jean Irene (lewis) Pote, who passed away April 3, 2011. Born in Borger, TX, he was the son of Richard and Lena (Hibbits) Pote. He came to California in 1939 and was a graduate of Eureka High School class of 1945. He attended Humboldt State College and then Oregon State College, receiving a B.S.C.E. degree in 1954. He was a member of the Tau Beta Pi, an engineering honor fraternity. He served in the United States Army Air Corps and the US Air Force. He participated in the Berlin Airlift and during the Korean War as a Staff Sergeant working stateside as a Communications Supervisor. Out of college he held a position with Shell Oil as an exploitation engineer. He started with the State Division of Highways in 1954 as a Highway Engineering Associate, in 1958 he worked construction, Advance Planning and Drainage. When the State Division of Highways became CalTrans he went on to engineering design and helped design a lot of freeways and off ramps. He had an exceptional work ethic and was very proud of his many engineering projects. He is a member of professional Engineers in California Government. Bob was a member of Pathway Church in Redlands. In addition to his wife Jean, he was preceded in death by his son Robert Douglas Pote. He is survived by his daughter Elizabeth (Betsy) and Ron Barrett, Corona, CA, Chuck and Donna Pote, Fresno, CA, Michael and Kathy Pote, Lincoln, CA, and Tim and Diann Lewis, Fowler, CA. Grandchildren David Huelsman, Jonathan Huelsman and Estela, Tom and Amanda Lewis, Steven and Katie Lewis, Michelle and Dan Schreiner, Stephanie and Bobby Tabor and Greg and Sherri Pote. He also has 15 great-grandchildren.