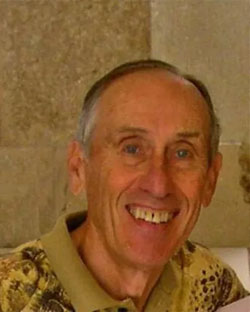 Robert Louis Rain, 88 years old, of Carlsbad, CA passed on to the Lord on November 28, 2021, after a lengthy battle with Lewy Body Dementia.

Bob grew up in the Midwest. He attended Wiley High School in Terre Haute, Indiana where he met the love of his life, Mary Louise Mabis. Bob and Mary Lou attended Purdue University and graduated with honors. Bob received his B.S. in Chemical Engineering and he and Mary Lou were married on November 26, 1955. Shortly thereafter, Bob entered the U.S. Navy and was stationed in Newport, Rhode Island and assigned as the Operations Officer aboard the Navy Destroyer “Caperton” DD650. Bob left the Navy in 1958 as a Lieutenant.

Bob began his illustrious career with Shell Chemical Company in Houston, Texas, Marvon Chemical in Parkersburg, WV and Baxter Laboratories, Inc, in Northbrook, Illinois. He was first assigned as Quality Control Engineer/Manager and later promoted to Plant Manager in Cleveland, Mississippi. Bob’s intelligence, work ethic and charismatic personality paved the way for his next move to Northbrook, Illinois. Bob was promoted to mid-Director of Manufacturing and finally a promotion to Vice President of Baxter International-Quality Assurance Worldwide. Bob enjoyed the friendships he made through his business endeavors and the friendships he shared with tennis players and neighbors in Northbrook, N. Barrington, Lincolnshire, Palm Desert and Carlsbad. He enjoyed traveling domestically and internationally whether with business associates or family and friends. After his retirement in 1991, Bob welcomed the opportunity to travel with Mary Lou and Umpire with the USTA in the Midwest region. Tennis has always been his favorite hobby, alongside running. To qualify for USTA Umpiring, Bob went to night school, shadowed other Umpires, and completed his formal testing to officiate in the Midwest. Both Bob and Mary Lou had a strong passion for their faith in God and enjoyed their time spent with members of the First Presbyterian Church of Deerfield and The Church of Joy, Palm Desert. They were generous with their time and their contributions to organizations that they held near to their heart.

Bob will be remembered by those whose life he touched. His humorous anecdotes and captivating personality left many with a smile and a fond memory.