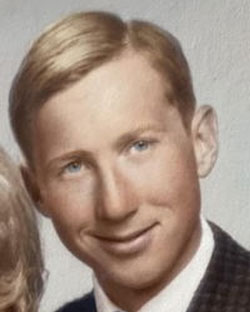 Robert H. Stranger went to be with his Lord on January 1, 2021 after battling cancer for 10 years. Bob was born in Evanston, Illinois on April 14, 1946. He served his country in the Vietnam war. Bob went to Active Duty as a Quartermaster on the USS Galvaston and did two trips to Vietnam. Bob came to know his Lord and Savior in 1966 before leaving overseas and was baptized by his youth pastor, Jim Godwin, at First Baptist Church of San Bernardino, CA. In between active and reserve duty in the Navy, he married Kathie Katona in 1968. Five years later, when Bob finished his Bachler Degree at California State College in San Bernardino, using his G.I. Bill. Bob soon began his career at the Southern California Edison Co in San Bernardino. And they had 2 daughters soon after. Bob while working, returned to school at Fullerton State University and received his Master’s Degree in Business/Economics. Once completed, Bob and Kathie had twins. After 20 years of service with Edison, he took an early retirement and left Palm Springs in 1996 as a Budget Manager. After Edison retirement, he spent part of his summer at Harvard Graduate School of Education. When he returned home, Bob enrolled at UCR and on June 11, 2004 completed his Doctor of Philosophy in the field of Education. Bob then became an Assistant Superintendent for both Colton Unified School District and Hesperia Unified School District, and found his second love in Education. Bob also was the longest serving Yucaipa/Calimesa School Board member and served his community and kids for 24 years, at school and the church. He eventually became an active participant in helping to establish the first charter school in Yucaipa, Inland Leaders. And once approved became the Chairman of the Board and served until his death. Bob leaves behind his wife Kathie of 52 years, and his four daughters, Gretchen Vance, Karstin Stranger, Jana Sanders, and Dora Denning, along with 12 grandchildren he dearly loved.