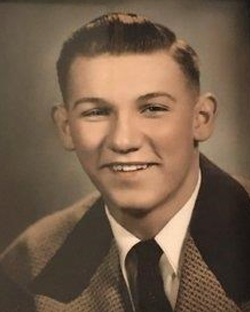 Robert (Bob) James Umphress, a journalist in the Riverside area for over 20 years, was born on October 10, 1929 to Bert and Hazel Umphress in Colfax, Iowa. He died peacefully on May 4, 2020 at his home, in accordance with his wishes, with his wife by his side, attending to his comfort. Bob is survived by his wife of 59 years, Irene, their two sons Dr. Val Umphress (wife Sabrina), Dr. Jason Umphress (wife Cecile), his only sibling Marilyn Barker (husband Larry), 6 grandchildren, and one great grandson. After graduating from Colfax High School, instead of accepting a college football scholarship, he enlisted in the U.S. Army. Following his military service during the Korean War, his Aunt Mable Stanek enrolled him at the University of Illinois. After his first year of college, he decided he wanted a change from the Midwest where he grew up, and ventured westward, enrolling at the University of Hawaii in Honolulu (UH). There, he majored in Economics and also took ROTC training. During his time at UH, Bob became the only 3 semester editor of The Ka Leo campus newspaper. He developed quite a reputation as a bold, daring, but honest writer who oftentimes would be quoted by the local columnists. He was accepted into the honorary academic fraternity Omicron Delta Kappa. He graduated among the top 10 outstanding students. After graduating, Bob fulfilled 3 years of military service as a captain in the U.S. Army. He then accepted a scholarship to attend Stanford University, where he earned his Masters degree in journalism. He stayed in the Bay Area, where he received The Silver Spindle Award for a series on social issues while working for the San Mateo Times. Later, he worked for the Oakland Tribune and the Stars and Stripes Newspaper (serving the Armed Services in Europe, Asia, and Africa). After 6 years working for the Stars and Stripes in Germany, Bob and his young family returned to the United States where he worked for the Riverside Press Enterprise for 8 years as a journalist and editor. He then started his own weekly community newspaper, “Jurupa This Week”, for which he was publisher, journalist, photographer, editor, and doer of all things from February 1, 1984 to his last edition on June 27, 1997. He was best known for his integrity in his life and in his writings. In the Jurupa area, he had been a member of the Chamber of Commerce, American Legion Post 500,and VFW Post 10267. He also served on the Veteran’s Wall Memorial Board, Jurupa Community Citizens Patrol, and Jurupa Cultural Center Board.