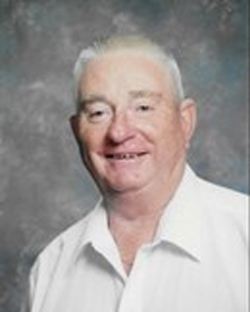 Robert Lee Vernoy, 94, died peacefully in his home in Victorville, CA on March 7, 2020. A veteran and California native, Bob grew up in Cherry Valley, CA before serving in the Army Air Corps in the Philippines and Japan during World War II. He returned safely and met his wife, Jeanne, in her native San Bernardino, CA.

They married in 1949 and were able to celebrate their 65th wedding anniversary before Jeanne’s passing in 2014. As an Assistant Wildlife Manager-Biologist for the California Department of Fish and Game, Bob raised both pheasant and rainbow trout, among many other species. His work in conservation included transporting oil-soaked birds for cleaning, and counting bighorn sheep by helicopter. Bob’s wildlife career extended 41 years before his retirement in 1989. His work for the Department brought him to the High Desert twice; the second time in 1970, and it has been his home ever since.

Bob and Jeanne were both artistic roller dance skaters, and loved skating. Bob later became a competitor and coach, and skated his last competition at the age of 81. His other passion was amateur radio, and as K6MQO, Bob spoke to people all over the world through radio transmission. Some of Bob’s happiest times were spent on the 13 cruises he took with Jeanne. Of the many places they visited, Hawaii, Costa Rica and Alaska were some of their very favorites.