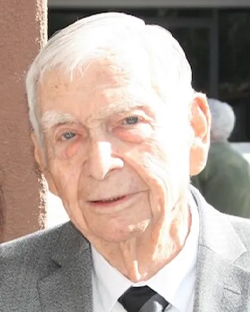 Robert Donald Weber, a longtime resident of Coachella Valley, died on June 3, 2022 in Cathedral City. He was 96. Don was born in Chicago, Ill on January 27, 1926 to immigrant parents, George and Ada Weber. He was raised in near north Chicago, Ill until he attended boarding school at Wheaton Academy at age 13 where he played football, basketball and baseball. His childhood summers were spent in Wisconsin at Bible camps, essentially returning home only on special occasions. When he turned 18, he enlisted in the United States Navy and served aboard destroyers in the South Pacific near the close of World War II. He was a proud veteran. He met Marcia Rowe of Kenosha, WI when he returned to Wheaton College, and on August 14, 1948, they were married. He worked in sales in the Midwest, living in Milwaukee, Morton Grove, and Wheaton, before moving west to Pasadena, CA to serve Fuller Theological Seminary where his brother-in-law, E. J. Carnell, eventually served as president. Don became the assistant to the president of the seminary, helping develop and raise funds for the school from 1956-1966. He was proud to have helped build an executive board that guided the seminary through choppy waters at that time. Carnell was his “hero” and Fuller’s mission was his passion. Don and Marcia raised four sons in Altadena, Tulsa, OK, Lake Forest, Ill and Spokane, WA. Don enjoyed his athletic sons, following them to sports events. He himself enjoyed playing handball at the YMCA (while the boys had swim practice in the pool). He was always “climbing the ladder” and made it to “B” status. In Spokane, Don returned to the academic world, serving as the vice president of development at Whitworth College in the 1970’s. He and Marcia took up skiing and spent weekends at Schweitzer Ski Area. A strong believer in education, he encouraged his sons and grandchildren to attend Whitworth. They came to the Coachella Valley in 1976, as they had always hoped. He worked briefly for Eisenhower Medical Center before establishing a development consulting business that served hospitals, colleges, symphonies and foundations. He worked into his 80’s assisting Desert Christian Academy as “the oldest working fund raiser.” In semi-retirement he and Marcia enjoyed traveling by motor home around the west to visit the driveways of their sons. He was a faithful member of Palm Desert Community Presbyterian Church and served on many boards and committees. He enjoyed many years with Marcia until her death in 2010. They were married for 62 years. In recent years he was grateful for the companionship of Donna Boeckman. She died in 2019. He is survived by sons Robert (Aletta) Weber of Cambria, CA; David (Tally) Weber of Carlsbad, CA; Richard (Betty) Weber of Keystone, SD; and Stephen (Cindy) Weber of Driggs, ID; niece, Jean (Warren) Becker of Thomasville, GA; 11 grand children and 20 great grandchildren.