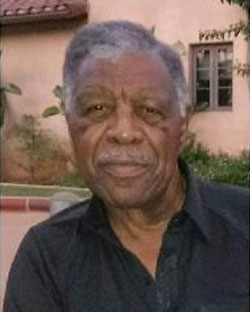 Roger Hughes Jr., a resident of Yucaipa, California, passed away peacefully Sunday, December 13, 2020 at his home surrounded by his loving family and friends. He passed due to complications from lung cancer that he had been battling for the passed few months. He was 82 years old and a resident of the Inland Empire since 1972. Roger was born in Philadelphia, Pennsylvania April 8, 1938 to parents Roger Hughes Senior and Frankie Overton Thurston. He had 5 loving siblings, his four sisters Loretta Fern, Millie Rippy, Rozina Bush, Catherine Hughes and brother James Charles Hughes. They preceded him in death. Roger grew up singing in jazz bands and performing in the streets of Philadelphia. He joined the Air Force at the young age of 19 years old in September of 1955. He served one tour in Vietnam for 14 months. He was a Career Airman for the United States Air Force Postal Courier. He retired from the Air Force after 20 years of dedicated services. He retired at the rank of Technical Sergeant. While stationed in Greece with the Air Force he met his beautiful wife Eleni Vasilakies and they married in 1962. They were happily married for 56 years when she passed. After Roger retired from the Air Force he received his Associates Degree at San Bernardino Valley College. He later went back to continue working for the United States Postal Office. He retired in 2005 after working fourteen years with the Post Office, a total of 34 years with the U.S. Government in all. He was a devoted member to the Greek Orthodox Church Saint Prophet Elias since 1972. He served many dedicated years on the board there as well as a devoted AHEPA member. Roger enjoyed spending time with his family and friends. He enjoyed singing and dancing. He loved gardening. He loved being active in the church and in his community. He will truly be missed by everyone who had the pleasure of knowing him.