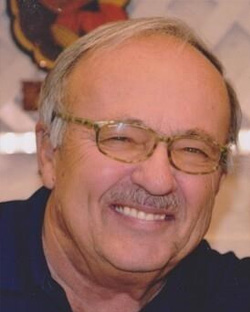 Roger Meyer of Desert Hot Springs, CA passed away on July 7, 2020 at 78 years of age. He was born in Morris, MN on May 9, 1942 to Harold and Marie Meyer. After graduating high school in 1959 he proudly served in the US Navy for four years aboard the Aircraft Carrier Ticonderoga. When he returned to MN he married Judie Baird in 1965. They moved to Lebanon, OR in 1967. He first worked as a meat cutter and later farmed in the area until 1999 when he took up trucking. He and Judie moved to Desert Hot Springs in 2007. Roger retired in 2008. Judie passed from cancer in 2010.

He and Madeline Bailey Johnson were married January 3, 2017. She survives as do his and Judie’s children Tony (Darla) of Albany, OR, Allen (Beth) of Scio, OR and Melanie Stevens of Lebanon, OR.and 8 grandchildren and 15 great grandchildren. Five siblings survive, Joyce Meyer of Winnetka, CA, Ruthann Hufnagle (Donald) of Apple Valley. MN, John Meyer (Lisa) of Holman, WI, Lynette Kluver (Robert) of Hastings, MN and Richard (Connie) of Mojave Valley, AZ.

Roger had an infectious laugh and loved to tease. He loved dancing and music and flowers and had a special love for babies. He was a happy man when he was blessed with grandchildren and great grandchildren.