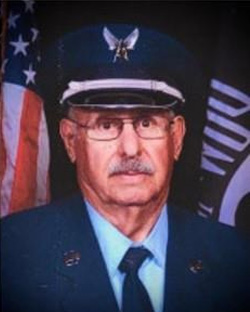 In Memory of Roger Lee Morrie Roger L. Morrie, age 85, died April 21, 2021 at his home in La Verne, CA. He was born and raised in Pasadena, the son of Myra and Anthony Morrie. He was a Golden Gloves boxer and a member of the John Muir and Pasadena City College marching band where he played the trumpet and marched in the Rose Parade three times. He was gifted in being able to play music by ear and often added his own flair to the music being played. In 1954, he enlisted in the U.S. Navy where he served for one year and then transferred to his real love, the U.S. Air Force where amongst other things, he served as crew chief working on F-86’s and C-47’s in Chamblee, France where he was attached to the Strategic Air Command. Following active duty, he became a proficient watchmaker and proto-type machinist and had his own business building memory drums for the government. After retirement and wanting to serve his country, he joined the Air Force Veterans Honor Guard Team 38, All Forces Honor Guard Team 21, and VFW Team 35 at Riverside National Cemetery. Performing military honors for deceased veterans was the highlight of his retirement years and he was extremely proud to be able to honor both our country and our country’s heroes by playing taps at their funerals. Being a bugler and member of the honor guard teams was a true commitment he took seriously for over a decade providing TAPS, including his well known ‘looooooong note’ bringing tears to all who heard it. He participated in Veterans Day ceremonies at both Riverside National and his local VFW until declining health interfered. He is survived by Jan Morrie, his wife of fifty-four years, sons Chris Morrie, retired army, and wife Dee, Tye Morrie and wife Jen, and Poppa to three grandchildren Madison, Ali, and Ethan Morrie whom he loved dearly, and brother Dale Morrie.